Eeyou Mobility to Launch in Northern Quebec via Rogers Network 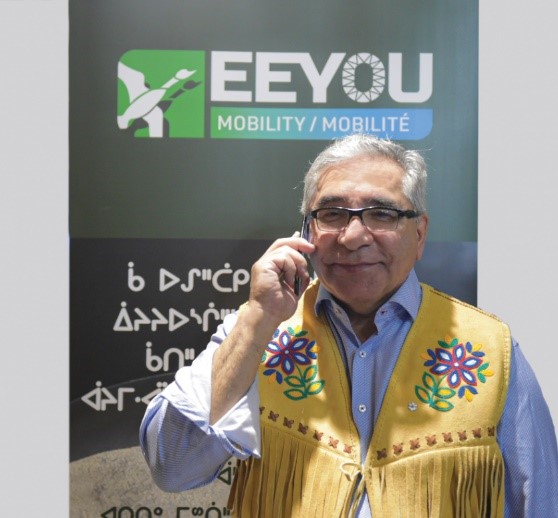 Picture: Abel Bosum, Grand Chief of the Grand Council of the Crees (Eeyou Istchee), makes one of the first phone calls on the new network.

“We are proud to partner with Eeyou Mobility to help increase economic opportunities, improve public safety, and connect residents and business across northern Quebec to the moments that matter most, both in the Eeyou Istchee and James Bay regions, and beyond,” said Edith Cloutier, President of Quebec, Rogers Communications, in an issued statement.

Nine Cree communities and five Jamésien municipalities will get local wireless coverage, expanding access on major highways and transportation routes. Rogers customers will be able to roam on the Eeyou Mobility network and vice-versa.

“Eeyou Companee is proud and excited to be involved in the long overdue improvement of wireless mobile services to our communities and to the region. This project falls squarely within our mandate under the La Grande Agreement with Hydro-Quebec to enhance economic development opportunities for the Crees and to improve conditions in the Cree communities,” added Henry Gull, President-Treasurer of Eeyou Companee.

Industry, Science and Technology Minister François-Philippe Champagne wants concrete commitments on cellular service affordability from both Rogers and Quebecor before he approves the transfer of Shaw-owned Freedom Mobile's licences to Vidéotron, which will allow Rogers' proposed $26 billion takeover of Shaw to proceed — reports The Globe and Mail. According to the publication's sources, Minister...
Nehal Malik
13 hours ago