Fido Glitch Charges iPhone Users Data Roaming, Even with Setting Turned Off [u]

For people who travel outside Canada with their iPhone, the device defaults roaming to OFF within iOS settings (Settings > Cellular > Data Roaming).

Despite this setting being turned off, some Fido users have experienced being charged data roaming. iPhoneinCanada.ca reader Ellard is a frequent traveller to both the U.S. and overseas and was recently charged $7.99 on his Fido bill numerous times for data he never used (you may remember him from those Apple Pay in Canada video demos).

As an experienced and savvy Apple user, Ellard knows to never enable data roaming while travelling to avoid expensive roaming charges. But on recent trips to the U.S. and the Philippines, he was surprised and frustrated to see unwarranted charges on his bill when he returned:

So pissed. Was just on the phone for 75 mins. The supervisor told me he received a lot of complaints recently with the same issue. He gave me $48 credit on the spot but he told me that’s the max he can do on his part. He sent an email to a different department to fully credit my account, but that department said all charges were legitimate. 1kbs and 2kbs of data 🙁

Ellard though the issue might have been with his iPhone, but after swapping his Fido SIM card into his iPhone 5s and iPhone 6 and a different iPhone 6 as well, it was determined to be a Fido network glitch.

Below, you can see his roaming data usage at 0 bytes: 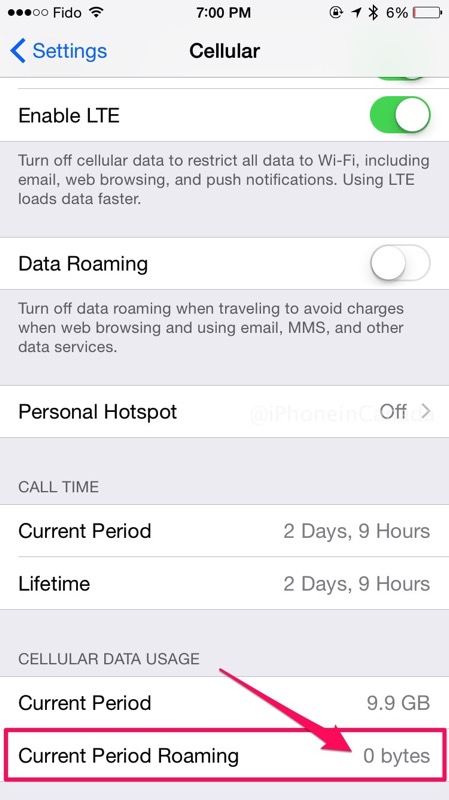 However, looking at his previous monthly bills dating back to September, he was charged the $7.99/50MB data roaming pack or billed for roaming data he didn’t use: 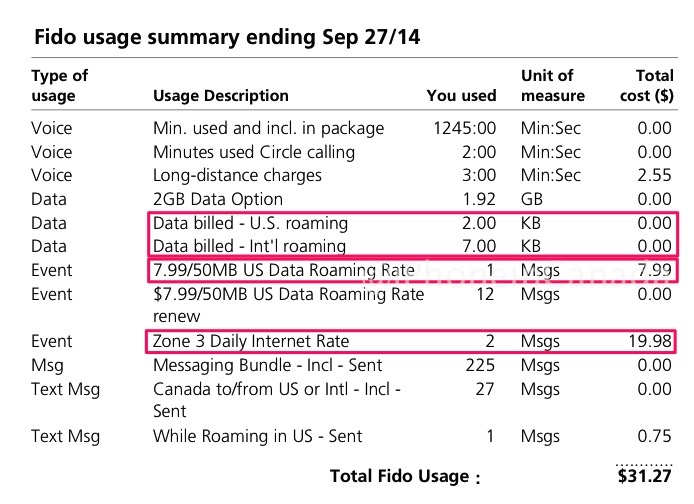 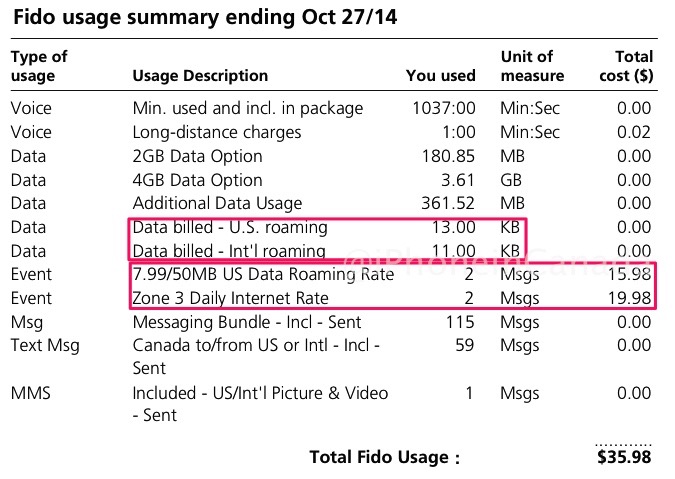 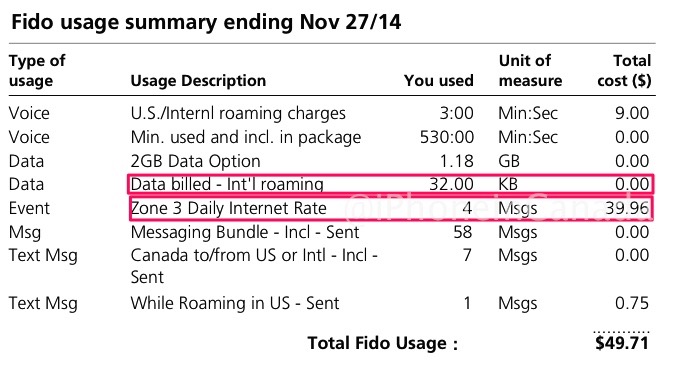 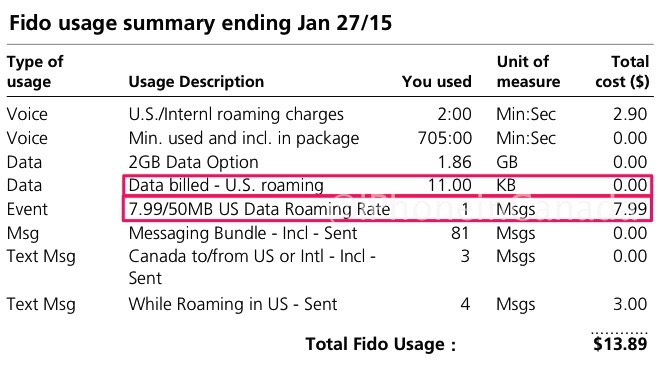 Fido only gave Ellard a partial $48 ‘goodwill’ credit for the error; he was unable to get all of the erroneous charges overturned.

Over at this Apple Support Communities thread, numerous other users are in the same boat, seeing data roaming charges from Fido despite having data roaming set to ‘OFF’:

Over Saturday night until Monday afternoon I was again in the States.  I turned off data roaming first, and then also turned off cellular data completely BEFORE LEAVING CANADA.  I did not use the phone to make/receive phone calls.  I stayed in hotels with WiFi and I did use that.  No problem Saturday night, and none on Sunday morning, even though I had heavily used the WiFi.  I packed up my gear (I ride a motorcycle and can NOT use the phone for anything while I’m riding) and toured around the Adirondacks in upper NY State for hours on Sunday.  When I got to my hotel Sunday night and checked into my hotel, when I got to my room I took the iPhone out of my pocket and found a message from Fido stating, “You’re using data at our exclusive promo rate of $4.99/day (+ tax)! You get up to 50mb of data to use over 24 hrs….”

This story is a reminder for everyone to check details of their monthly bills if you’ve setup automatic payments and have travelled outside Canada recently with your iPhone. Either get a local SIM card or use a service like Roam Mobility.

Have you ever been billed by Fido for data roaming you never used?

We’ve reached out to Fido for comment on this story and will report back with any details.

Update Feb. 3, 2015: Rogers responded via email with the following:

We are aware of this issue and are proactively crediting customers who were wrongly charged for U.S. roaming when data roaming was turned off while they were in the U.S. We encourage customers to get in touch with us if they have not already been credited the full amount.

The spokesperson also stated they would refund Ellard the full amount, with a reassuring “we’ll make it right.”

So if you have suffered from this, now is the time to contact the company and get a refund on erroneous data roaming charges.