Rogers flanker brand Fido appears to be offering an Internet 75u promo again, but this time to existing customers only. Fido Internet currently has a footprint in Ontario. 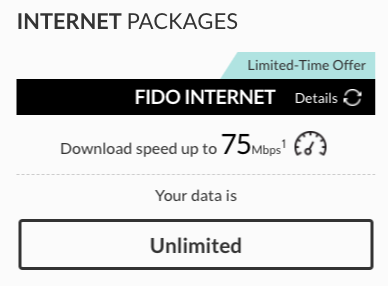 According to RFD, the offer available now is the Internet 75u plan for $32.50 per month, for 12 months, which is 50% off its current regular price of $65 per month. It also comes with unlimited data per month, while an $8/month modem rental is included in the price.

You may recall Fido offered this same Internet 75u plan back in December as a promotion for those with eligible Fido mobile plans.

An existing Fido Internet 75u promo on the company’s website only offers the plan for $45 per month for six months, saving you $20 off the regular price.

Again, this offer comes entirely down to you reaching out to Fido and asking for the deal. It’s a practice worth trying against any Internet service provider, as for the most part, they may give you a discount to keep you from switching to a rival.