If you’re a Fido customer in Quebec, you may want to check your online account for some special offers. 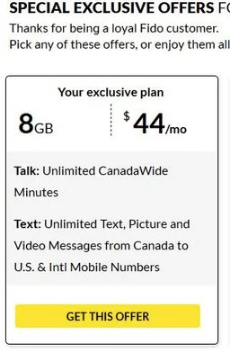 Right now, it appears some customers are being offered a $44/8GB BYOD plan in Quebec, which includes unlimited Canada-wide calling and unlimited international SMS/MMS, according to readers on RFD. That price is $12 off the current price of $56/8GB from Fido in Quebec.

The company says “thanks for being a loyal Fido customer. Pick any of these offers or enjoy them all.” Other “special exclusive offers” include $51/10GB and $55/5GB BYOD plans, so the offers being made appear to be account specific.

Fido currently is advertising a promotional $49/6GB BYOD plan in Quebec. For the rest of Canada, there are currently special Lunar New Year promos available from Fido as well.

These offers from Fido could be a move to prevent customers from trying out Fizz, the new wireless brand in Quebec from Videotron, which officially launched last fall.