The offer was emailed to a targeted group of Fido users, as shown in the screenshot shown below by a user on RFD: 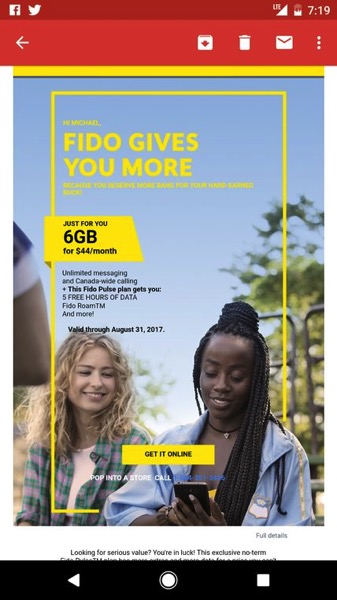 Many other forum members confirmed they were able to get the deal, either by clicking through via the targeted email or calling in to ask for it.

The plan is $5 cheaper than what’s currently being offered by Fido in Quebec, as the 6GB Pulse Plan currently is priced at $49 per month. There’s also an 8GB plan available for $56 right now.

For customers outside Quebec, Fido is currently offering retention plans priced at $55/6GB and $75/10GB. But for everyone else (aside from SK/MB), Fido’s 6GB Pulse Plan is priced at $85 per month for BYOD, $41 more than what this promo is in Quebec.

Wireless pricing in Quebec is competitive because of Videotron and this offer looks to undercut the latter’s current 6GB offering, pricing at $49.95 per month.

If you’re in Quebec, let us know if you were able to switch to this plan.

Image via RFD Fido appears to be offering a special promo plan for some existing customers, in the form of a $38 per month plan with 25GB of data. According to RFD, the plan is available online under the ‘Change Plan’ section of the website, showing the heading “Exclusive plan for you”. The existing Fido […]
Gary Ng
4 days ago

PCMag has released its 10th annual Fastest Mobile Networks Canada results, this time for 2022. This is where the publication drives across Canada to test wireless speeds and coverage with its array of devices. For 2022, the fastest mobile network crown goes to Bell, seeing maximum download speeds of 1373 Mbps, versus Rogers in second […]
Gary Ng
6 days ago