Fido has started to upgrade physical equipment on its towers as part of the Western Canada Network Upgrade Project. The company has started to notify customers via SMS explaining how “intermittent disruptions” to service could occur over the next two weeks:

Fido info: We are upgrading our network in your area in an effort to bring you a better wireless experience. This work may cause intermittent disruptions to your service that could last up to a few hours in specific areas over the next 2 weeks and we apologize for any inconvenience. We will work as quickly as possible and will let you know when the work is completed. To find out more, visit fido.ca/tower 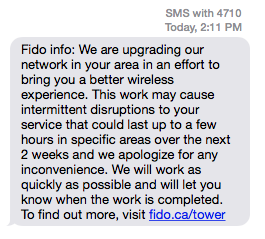 According to the company’s FAQ page on the upgrade project, here’s what is being done:

Fido is replacing the physical equipment on its network towers in an effort to deliver a better mobile voice and data experience to customers. These changes will enable more of our customers to access the 700MHz spectrum (radio waves that carry cellular signals) as well make LTE available in places not previously accessible.

Rogers secured nearly $2.1 billion in financing for their 700MHz wireless spectrum, which is known for being able to boot signals in hard to reach areas such as “basements, elevators and in buildings with thick concrete walls.”

Fido says customers should notice improvements once upgrades are completed, in particularly “when streaming video”. So there you go, start streaming more video over the data network to test this out (here’s hoping you won’t incur overages).