Earlier we told you about how Rogers was set to unveil a bronze statue of the company’s late founder, Ted Rogers, outside Rogers Centre in Toronto. The ceremony took place this morning and now the Rogers Redboard has posted an image of the statue, along with some relevant info by the corporate historian for Rogers, Ian Anthony:

Ted’s father, Edward S. Rogers Sr., laid the foundation for a proud tradition of simplicity and speed as early as 1924. At that time, radio receiver sets involved three large separate batteries and a mass of wires. Edward S. Rogers Sr. changed all that, inventing the first radio tube in the world operating from household electric current.  That meant people only needed to connect their radios to their home electricity, then they were good to go.  This revolutionized the industry, and was a leap forward in home entertainment. In fact, the first Rogers Radio slogan was ‘Just Plug In ~ Then Tune In!’ It was that simple.

Ted Rogers continued along his father’s path in telecommunications. Highlights from his career include: 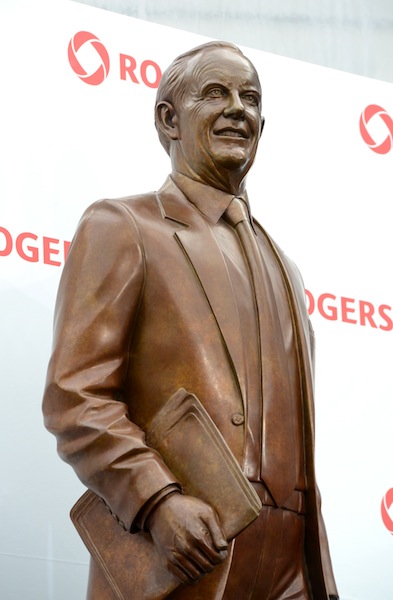 It’s clear the entrepreneurial spirit in Ted Rogers was influenced by his father, who helped changed the way we listened to radio.