Yesterday’s iPhone 3G launch in Canada was quite the gong show across the country. Even though the doors opened at 8am, sales came to a sudden halt at–8:05am! The problem was that the iTunes server went down, which made activation impossible.

On top of that, the Rogers internal system went down–and stayed down! So that’s a double whammy. One would suspect that Rogers could have prepared themselves a little better for this. I mean, they know the iPhone 3G is going to sell like hotcakes so why not have your back systems on standby? Yesterday’s post incurred over 120+ comments–an indication that Canadians were either livid or happy regarding the launch. I found a lot of people had bad experiences, while a small minority was quite successful.

Anyways, enjoy the following photo essay of the Vancouver iPhone 3G launch at the Rogers Plus location (aka a Rogers Video with a TINY section for cellphones) on West Broadway/Arbutus.

The line up that went around the corner… 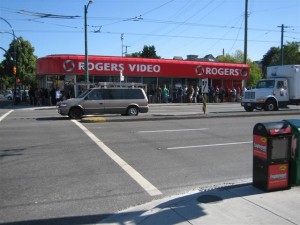 I arrived at 5:45am…shortly after, these people arrived after to form the line behind us 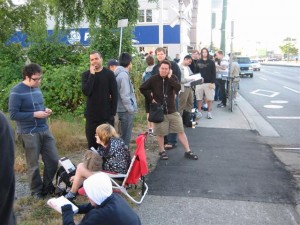 Well, well, well…look at what we found in the Vancouver Sun? It’s Canada’s FASTEST mobile network! 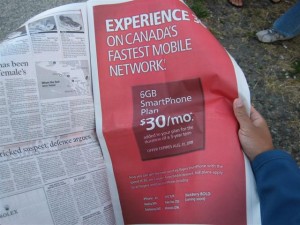 Rogers did have draws as promised! However, afterwards they just gave away the rest of their swag. Managed to get a free umbrella, arm sweatband, and tshirt. Hey, now it’s my time to do the gouging of Rogers freebies!

The form you see on the chair was handed out to us to tally up how many people wanted the rare 16GB iPhones. 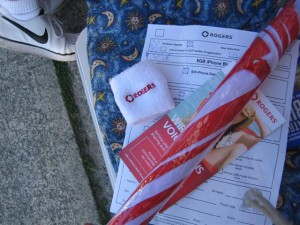 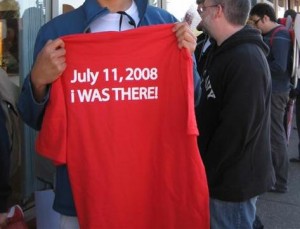 Looks like we have upper management being interviewed by Bradley Shende, executive producer from MSN’s Connected Life technology show. They also interviewed yours truly, so keep your eyes peeled for the next segment!

I also did interviews with Asians media outlets Fairchild TV and ePoch Times. They saw me, asked me if I spoke Cantonese (I said yes) and we were off to the races. Umm…too bad my Cantonese is spotty at best and trying to talk about the iPhone 3G was just humorous. “blah blah blah 3G blah blah iPhone…” is pretty much how it went! If you have a clip of the Fairchild segment, let me know!

But the fun didn’t stop there. I also did some “on the scene” updates with 95 Crave FM (thanks Buzz!). My last update I called them to inform them about the unfortunate turn of events. One hour in and only 1 or 2 iPhones activated, I had to jump ship. I left as it I couldn’t wait any longer. BUT…good news. I managed to track down an 8GB iPhone in Victoria! I should have it by tomorrow! 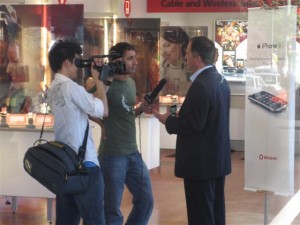 Ahh…this is when the problems started. Eager iPhone 3G fans getting the unfortunate news that the systems are down. All they can do is wait in pure agony. One of the guys here, upon opening up his brand new shiny white 16GB iPhone 3G, used a BOX CUTTER to try and take out his SIM card tray!

A group of us watching from the outside cringed at the sight of torture on that brand spankin’ new iPhone! I don’t blame him, as the Rogers employee watched him attempt the procedure–I think she was the one who gave him the boxcutter! FAIL! 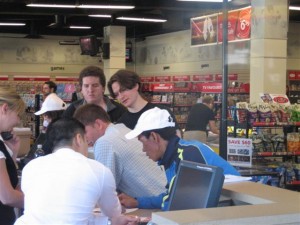 Here’s a tiny clip of the number of people in line as of 5:45am:

…and that was the launch! Too bad Rogers failed with their systems going down. I will report back with my iPhone 3G if all goes as planned tomorrow. So, how do you like your 3G so far? Is it everything you’ve always dreamed of? 😉