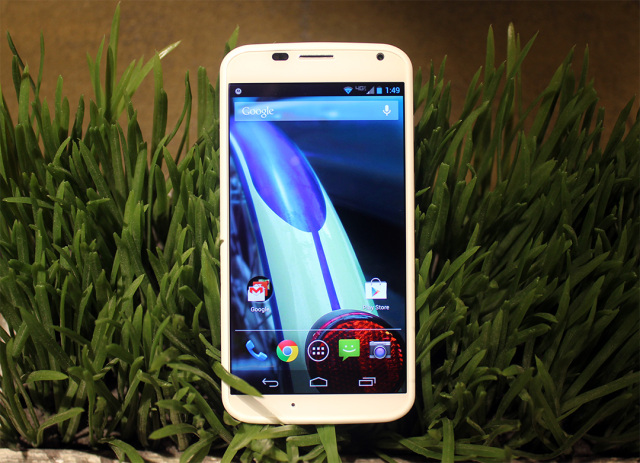 The Moto X has landed today and its first stop in Canada is at Rogers. The country’s No. 1 carrier offers the handset exclusively for as low as $$189.99 with a two-year contract.

So what makes the Motorola different from the others? Well, since Motorola is now a Google company, this is the first Moto handset designed with Google’s direct oversight. Also, the Moto X is uniquely customizable.

The tech specs are impressive: it comes with a Snapdragon S4 Pro, with a 1.7GHz dual-core Krait CPU and a quad-core Adreno 320 GPU, alongside two unique Motorola processors, with one of them handling language interpretation so that Google Now won’t drain the battery.

“You can control the Moto X with only your voice. No kidding. With Touchless Control, start by saying “OK Google Now.” Then, you can get directions, set an alarm or even ask it if you need to bring an umbrella with you and it will give you up-to-the-minute weather for your location. Did I mention you can do this without touching it at all? Awesome,” the Rogers press release highlights.

Here is what TechCrunch says about Moto X:

So far, the touchless controls work like a charm (even those this is technically non-final software). Once a brief setup process was completed, I successfully asked the X to give our video producer Steve a ring and do a Google search for “TechCrunch”. Meanwhile, a few vigorous shakes coaxed the X into firing up its camera, and flipping the thing over and over caused the active display to show off the time and how many messages I had waiting for me. And since Android is largely unencumbered here, whipping through pages of apps and scrolling through webpages was generally very smooth — though it could be smoother.

Since Rogers has more LTE network in the 2600MHz spectrum band than other Canadian carriers, the spectrum-compatible Moto X users will be able to benefit from the LTE speeds the carrier offers.

The Moto X will be available in black or white to Rogers customers this August for $189.99 on a two-year contract. Existing customers can reserve it using the Rogers Reservation System. Let us know if you are going to jump on this one.