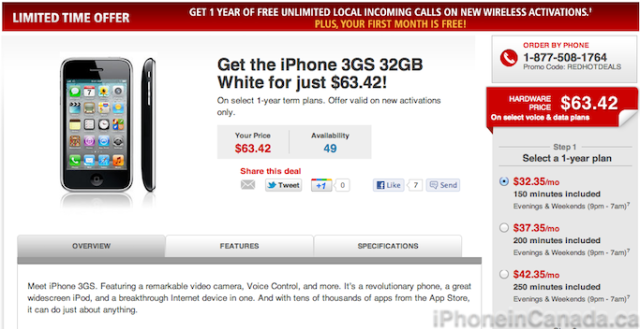 For those looking for a cheap iPhone 3GS, Rogers currently has an offer on the 32GB white iPhone 3GS for $63.42 on a one year term.

Voice plans start at $32.35 (150 minutes, 9pm evenings), data starts at $10 for 100MB, and included is one free feature, either ‘double your minutes’, unlimited messaging, unlimited My5 Local, or unlimited network calling. A ‘limited time offer’ notes 1 year of free incoming calls and your first month free.

Typically, the iPhone 3GS is free on a three year term. This offer is for one year at the $63.42 price. After one year, one could pay Rogers $50 to unlock the device (along Fido, the other authorized carrier unlocker as noted by Apple), which could make for a decent travel phone.

Let me know if you’re going to jump on this offer, or share your thoughts below.