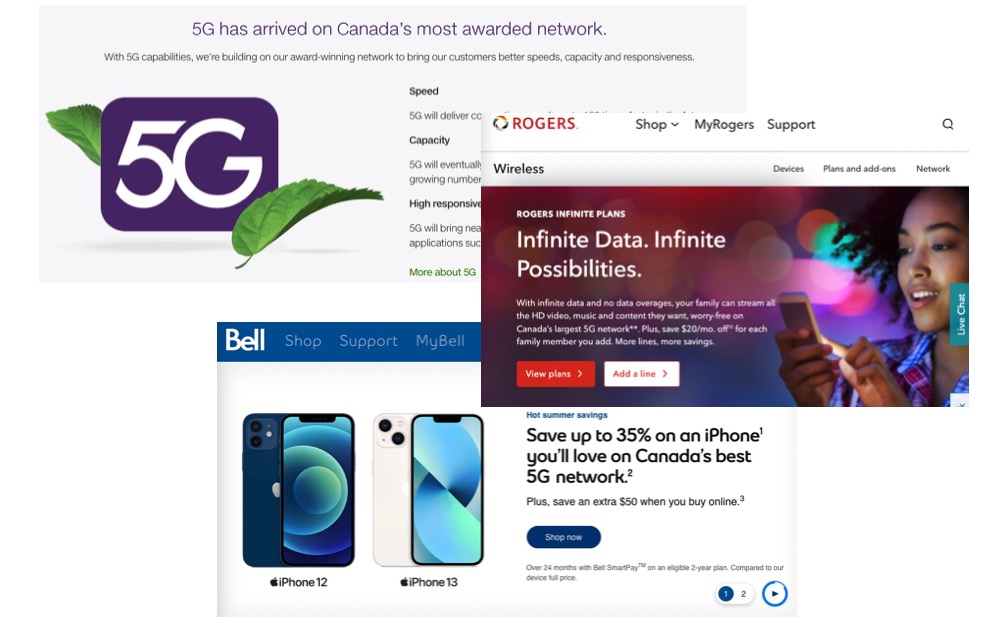 Rogers kicked it off by announcing the new spectrum launched in Nanaimo, B.C., showing some love for Western Canada, but as of today, the company confirmed with iPhone in Canada it also has also started rolling out to Calgary, Edmonton, Montreal, Ottawa, Toronto and Vancouver.

Bell followed to say it would launch its 3500 MHz 5G spectrum, marketed as “5G+”, soon in Toronto.

The 3500 MHz 5G mid-band spectrum offers wider coverage, faster download speeds and more capacity for wireless networks, plus allows more applications. Previously, the 3500 MHz band was used in Canada for fixed wireless internet, but an auction in July 2021 saw $8.91 billion spent by telcos to purchase spectrum for 5G wireless instead.

What wireless plans are eligible for 3500 MHz 5G spectrum from Rogers, Telus and Bell?

A Rogers spokesperson told iPhone in Canada its new 3500 MHz 5G spectrum is available for any Infinite plan, which starts at $85 per month for 25GB of data.

Telus and Bell are requiring $95 per month plans to use its 3500 MHz 5G spectrum. It’s unclear if these two companies will lower their entry price like Rogers, or if the latter will increase their base requirement to match its rivals.

As for compatible iPhones that support the 3500 MHz 5G band in Canada? That is the iPhone SE 3, any iPhone 12 or iPhone 13 lineup model.

If you require the fastest 5G speeds, get ready to pay for an unlimited data plan. Sub-brands such as Fido, Koodo and Virgin Plus likely won’t have 5G access anytime soon, as the telcos want subscribers to pay more for premium 5G-eligible plans.

Staples Canada and Bell announced a multi-year exclusive agreement on Tuesday, to sell Bell, Virgin Plus and Lucky Mobile wireless and wireline services at Staples stores across Canada for both consumers and small businesses. Both companies will also partner to sell Bell services to medium businesses through the Staples Professional sales team. Beginning in late […]
Gary Ng
19 hours ago