Rogers launched smartwatch plans for Apple Watch cellular customers back on September 17th, but ever since the system launched, customers have been running into self-serve activation issues.

According to iPhone in Canada readers, they’ve been unable to activate on a cellular Apple Watch plan from their iPhones. Rogers customers service reps are only able to say “We’re working on it,” as support tickets continue to get escalated.

The Rogers Community Forums have numerous customers complaining about their cellular Apple Watch activation errors on their Series 3 and Series 4 models. Customers are seeing error codes WS300, WS201 and WS501.

As one Rogers user “capt_commander” on the company’s forums puts it:

This is quite ridiculous for Rogers. We’ve been waiting for this service to literally pay more money each month, for a year, and when it finally arrives, it doesn’t work. Others have mentioned escalations to Apple, which leads me to believe that Rogers doesn’t even know what’s going on, and there will be no quick turnaround on this one.

The option to Set Up Cellular within the Watch iOS app is greyed out for many customers, with a message noting, “Your Rogers account is not eligible to enable cellular on your Apple Watch. Contact Rogers for more information.” 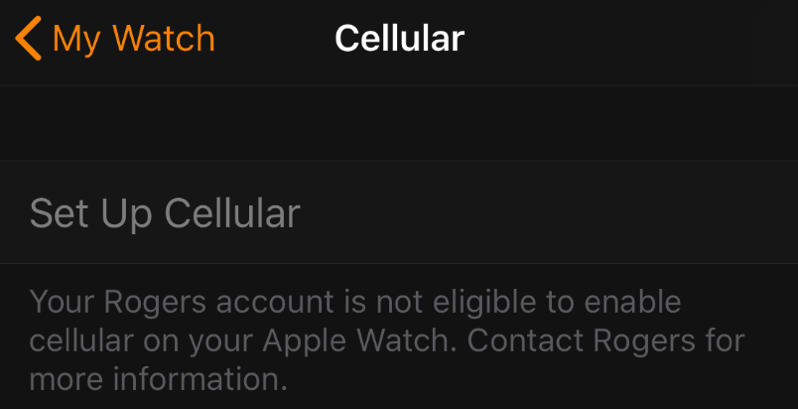 Some solutions for these activation errors include restarting both your iPhone and cellular Apple Watch, then trying the process again. But some have said this doesn’t work. Even those who have unpaired and re-paired their watches say the problem still persists, meaning it’s a problem Rogers needs to fix.

We reached out to Rogers on late Friday afternoon to seek comment on the issue, but haven’t heard back. Once we do, we’ll report back with an update.

Are you having trouble activating your Apple Watch cellular model on Rogers?

Update Sept. 23, 2018: A Rogers spokesperson emailed iPhone in Canada the following: “The majority of our customers have successfully enabled the cellular service on their watches. If a customer is unable to activate, one of our care reps would be happy to assist.” I don’t know if this helps anyone, but this is their official update on the matter.