If you’re a wireless customer with an unlocked phone, Rogers wants you to sign up to a Share Everything Plan as a BYOD (bring your own device) customer, as new promos are targeting these folks.

Rogers says says new or existing BYOD customers (which save $20/mo off plans, as usual), that sign up to Share Everything Plans before August 13, 2015, you will get 12,000 Rogers First Rewards points, “which is like getting $120 off your next device upgrade.” 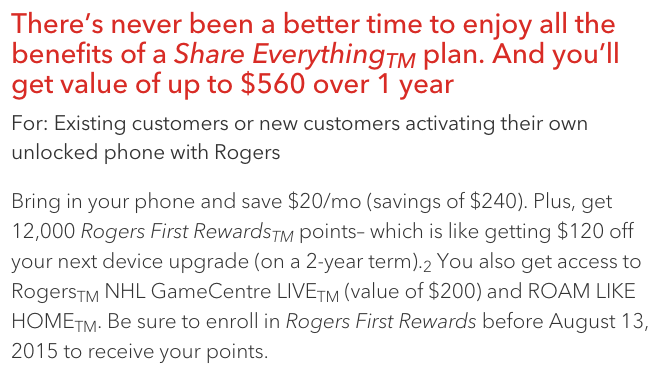 Share Everything Plans come standard with free access to Rogers NHL GameCentre LIVE and ROAM LIKE HOME, but new customers may not know this and think it’s part of a promotion, according to the text above. The bonus here is the 12,000 First Reward Points.

With the Wireless Code now in effect as of yesterday, this ‘promo’ looks to target ‘free agent’ BYOD customers to sign up for Rogers Share Everything Plans with the incentive of bonus First Rewards Points.

Rogers says you can get this offer via live chat, buying online, visiting a store or calling their toll free number.

Rogers and Shaw today announced an extension of their proposed $26 billion merger, along with the sale of Shaw-owned Freedom Mobile to Quebecor’s Vidéotron in a side deal that's part of the broader transaction, to February 17, 2023. "All parties remain committed to the pro-competitive transactions, which will deliver significant benefits to Canada and Canadian...
Nehal Malik
10 hours ago