Rogers has announced it will turn the idle home of the Toronto Blue Jays, Rogers Centre, into a new food storage and prep initiative to support Food Banks Canada.

Called Step Up to the Plate, Rogers and the Jays Care Foundation will see 10 million pounds of food setup at Rogers Centre, to be sorted into food hampers on the field and distributed across the country to families in need.

Rogers says 6,000 pallets of food will be sorted into 390,000 hampers, offering 8 million meals. Each hamper will contain various non-perishable groceries, offering one week’s worth of food to an individual, with company employees and families volunteering towards the effort, from coast-to-coast. 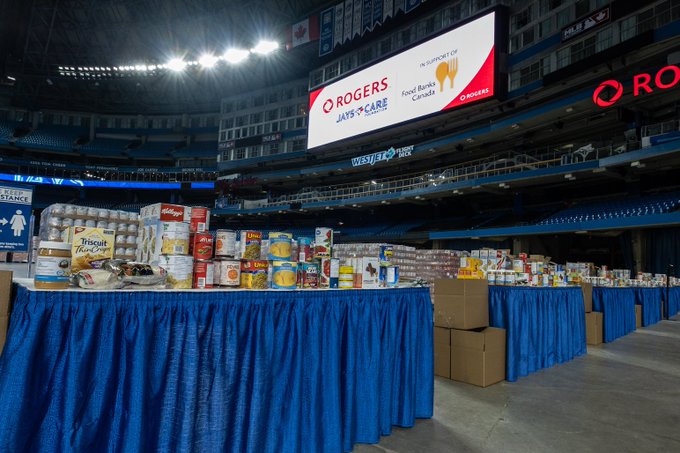 “At Rogers, we consider all Canadians to be part of our extended family and we believe we have a responsibility to give back and help our family members in need,” said Melinda Rogers-Hixon, Deputy Chairman of the Board, Rogers Communications, in a statement. “With Rogers Centre vacant until baseball returns, we have an exciting opportunity to open our pantry of assets and offer a much-needed resource for Food Banks Canada.”

Rogers says it has already helped Food Banks Canada with over 2 million meals during COVID-19.