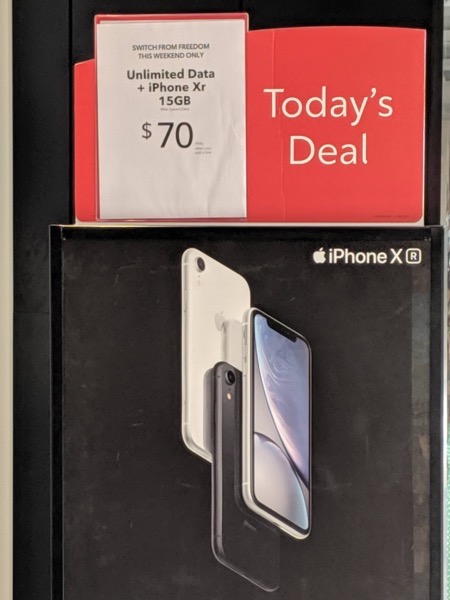 Looks like there are a few iPhone XR promos going on right now between Rogers and Freedom Mobile targeting each other’s customers to switch over.

Fido has an iPhone XR for $0 upfront and a $75/10GB plan for Freedom Mobile switchers. Freedom Mobile has its own promo targeting Rogers/Fido customers in the form of a $0 iPhone XR with $55/15GB plan, a pretty hot deal.

As for Rogers, they have their own promo this weekend, which is offering $10/month off for 24 months and 5GB bonus data for people switching over from Freedom Mobile.

For those adding an additional line to Rogers, they can get a $0 iPhone XR with a $70/15GB plan. Normally, an extra line would be priced at $95/10GB, but after the Freedom extras and multi-line discount, it works out to $70 and data is at $15GB, after the bonus.

If you’re just signing up for a contract with a $0 iPhone XR, it normally is priced at $95 with 10GB of data, but the Freedom Mobile port bonus turns it into $85/15GB.

Rogers says the promotion targeting Freedom Mobile customers porting over ends on August 26, 2019, available in-store. If you sign up for any contracts this weekend, head over to The Mobile Shop as they are offering 200,000 PC Points with activations.