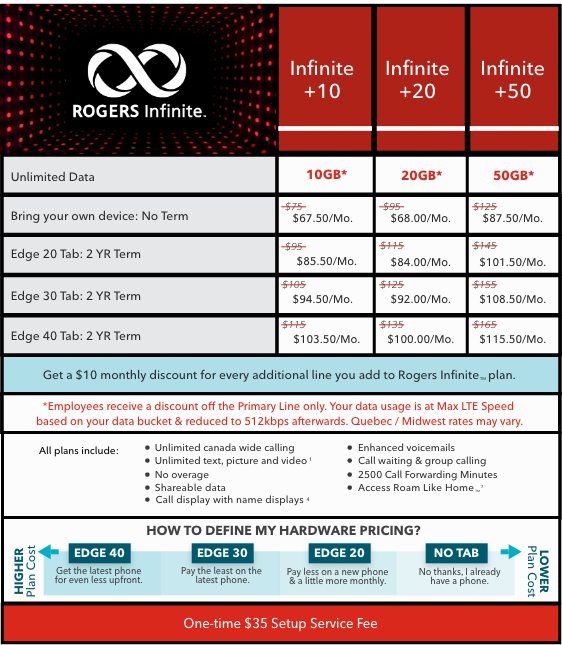 If your employer offers wireless service through Rogers, you may want to check for the latest employee pricing plan promos. Right now, Rogers is offering $300 off its Infinite plans for 24 months, for BYOD, Edge 20, Edge 30 and Edge 40.

If you’re interested in BYOD Infinite plans, Rogers has the following prices listed:

Rogers also says you can “get a $10 monthly discount for every additional line you add to Rogers Infinite plan.” There is a $35 “setup service fee” with each line.

All Rogers Infinite plans will see data throttled to 512 kbps once your data bucket is exceeded for the month. All plans include unlimited nationwide calling and global texts and the usual extras.

Back in November, Rogers EPP promos saw a similar discount up to 30% off, but the Infinite 20+ BYOD plan at $68/20GB is decent as there’s added savings right now.

Let us know if you’re going to jump on any of these Rogers EPP deals while they are still available.

Rogers’ proposed $26 billion takeover of Shaw Communications, if successful, could deliver a $216 million payday to 12 hedge funds that bet on it — reports Reuters. The controversial and heavily contested merger has a January 31 deadline. With the Federal Court of Appeal rejecting the Competition Bureau’s appeal of the merger on Tuesday, Rogers and...
Nehal Malik
9 hours ago