Ooka and their Speedtest Intelligence Internet tests have awarded Rogers for the Fasted Fixed Network, with the company seeing the fastest downloads speeds compared to Bell Canada, Shaw, Telus and Videotron: 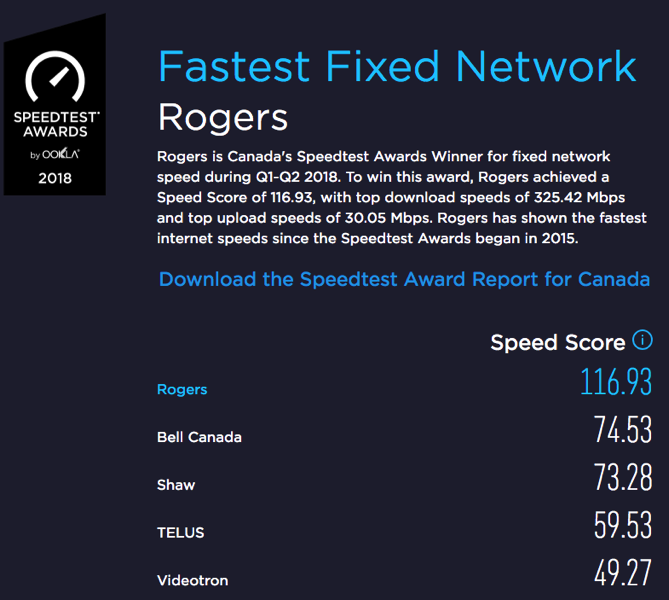 This the fourth year in a row Rogers has won this award, which was based on over 17 million tests by over 9.6 million users who ran speed tests from Ookla.

“We are proud that Speedtest Intelligence results have once again proven that we offer the fastest Internet in Canada,” said Jorge Fernandes, Chief Technology Officer, Rogers Communications, in a statement.

Speedtest Intelligence results concluded Rogers has the fastest Internet in Toronto, Ottawa, London and others.

“We are pleased to award Rogers with the award for Fastest Fixed Network in Canada for the fourth year in a row. This recognition is a testament to their exceptional performance in Q1–Q2 2018 based on Ookla’s rigorous analysis of consumer-initiated tests taken with Speedtest,” said Jamie Steven, EVP at Ookla, in a Rogers press release.

Compared to other Internet Service Providers, here are the results of Rogers versus their competitors, when it comes to Ookla’s Speed Score metric:

While Rogers saw the fastest download speeds at 325 Mbps, the top upload speed in tests went to Telus at 149.22 Mbps, followed by Bell at 125.68 Mbps. Shaw saw the lowest average latency at 18 ms, followed by Rogers at 19 ms.