Rogers wireless customers are complaining about the company’s “GeoTxt” ad service (formerly Rogers Alerts), which sends coupon offers when a user is within a particular location of an advertiser.

According to Rogers, the GeoTxt service “sends you FREE text messages with great offers from some of Canada’s best brands,” at up to five text messages per week.

The text messages are based on your cell phone’s location when connected to Rogers and according to the company, is an opt-in service, the moment you sign a wireless agreement.

Lately, some offers being sent out have rubbed Rogers customers the wrong way, and naturally, they took to Twitter to vent their frustrations.

Ryan Cash, the founder of Built by Snowman, was pretty clear about how he felt yesterday:

This was the ad in question Cash received, as he appeared to be in the vicinity of a LCBO (Liquor Control Board of Ontario) location: 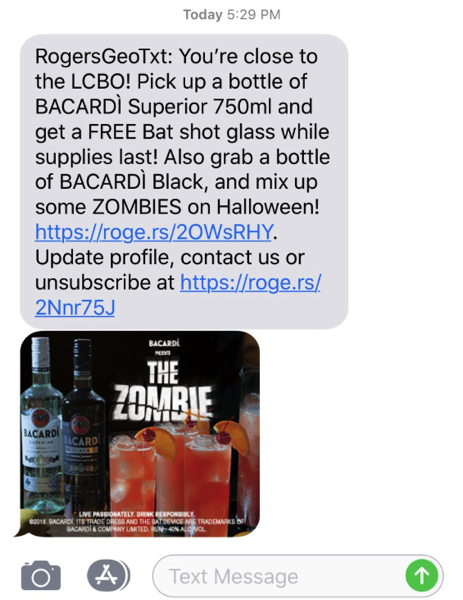 There are other examples of customers questioning the service, as the texts come across looking like spam:

Hey @RogersHelps – are these legit texts from you or spam? URL in second message strongly suggests spam. pic.twitter.com/ztoUz1dJuk

Completely offside @Rogers @RogersMediaPR sending me direct advertising when I already pay outrageous cell phone fees! I did not opt in for this. Your selling my data, still charging me full pop! If you want to run ads against me you need to drop my monthly bill or at least ask!! pic.twitter.com/hxQdXn03jn

The Rogers social media team explained to customers, “You gave authorization for Rogers to provide the Rogers GeoTxt service when you signed and accepted the terms of the Wireless Service Agreement / the Account Maintenance Agreement. Your phone number will never be made public or sold to others.”

@Rogers I find it funny that you are spinning this as a free bonus for me while also leaning on a reference to our service agreement in the hopes of appearing less shady than you actually are… this should not be an opt out, it should be opt in. Please stop spying on me.

@RogersHelps so here we are again you are sending me spam texts again. Every time you send me one I cancel a rogers contract but yet you still enroll me in the program every few months. This is the last cell on rogers. Way to abuse you customers

Have you received any Rogers GeoTxt messages lately? Should the service be opt-in by default as per the Rogers wireless service agreement?