Rogers has announced today the launch of new one month international data roaming passes for various regions including Europe, Asia, the Caribbean, Latin America, Australia and New Zealand. To purchase and subscribe one of these passes via your iPhone or other smartphone, users need to text “travel” to 7626 or visit www.rogers.com/m/roam on their device’s browser.

Below is a chart supplied to us of the following prices and data amounts included: 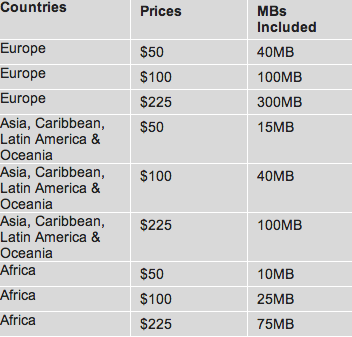 Rogers says these new packages will text real-time alerts to your phone to monitor data usage. The data roaming plans will cease when the pass expires by time or usage to prevent excessive overages. Once limits are reached, customers will have the option to purchase another pass or switch to pay-per-use.

Just a couple weeks ago Rogers launched their new $7.99 per day U.S. roaming rate with 50MB of data.

This is a good start—but for seasoned travellers, your best bet for roaming overseas is to use an unlocked iPhone and subscribe to the voice and data plans of a local carrier, as a much more cost-effective solution. Anyone going to jump on these new data roaming passes?