Numerous Roger Internet customers in Ontario are dealing with outages, which some noting downtime has been as long as four days–and counting.

According to Canadian Outages, most of the complaints are originating in Toronto, Scarborough, Mississauga, Ottawa, North York, Kitchener, London, Guelph, Brampton, and Burlington. 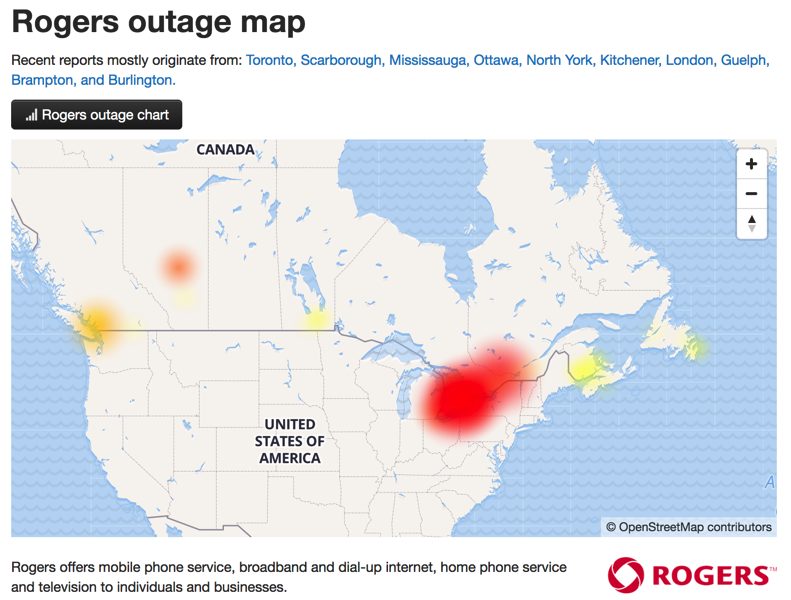 Various complaints on social media have Rogers customers detailing outages after getting new modem hardware installed late last week. The installations resulted in immediate downtime, and for some, is still ongoing, 96 hours later or more, after first reports surfaced as early as last Wednesday. Many are unable to have their hardware activated.

.@Rogers has been down since WEDNESDAY for some people. Since FRIDAY MORNING for me. https://t.co/Pxj855UWFw

Yup. That is what is most frustrating. In my case, modem was fine but Rogers informed me that I would have to upgrade it soon. What a mess.

Thank you for your patience as we work to resolve this matter. Mark

Here’s the root of the problem according to @RogersHelps from 10 hours ago:

“In regards to the provisioning issue you tweeted: Some of our residential customers who recently activated or had a new product installed were experiencing a delay in connecting their services to the network.We’re processing transactions now and expect all services up and running by later this evening.”

Some customers are saying with the Internet outage, they have exhausted their mobile data plans, trying to stay connected online. Those who have complained to manager have detailed receiving credits ranging from $55 to $150.

Customers are alleging Rogers installed new hardware for customers, despite knowing there were internet outages. Their social media team is telling customers “This is still in progress and service will be restored as soon as possible.”

Is your Rogers internet down? If so, when did you first experience an outage?

Update October 23: A Rogers spokesperson issued us the following statement after we inquired about the cause of the outage:

We understand how frustrating this has been for our customers waiting to get up and running, and we sincerely apologize. We’ve been working around the clock to get services up.

To our knowledge, the majority of customers affected by the outages are up and running, but there are still remaining customers still waiting to get back online.

Yesterday, Telus and Koodo announced they were waiving long distance and roaming charges to Turkey and Syria, following two devastating earthquakes affecting both countries. Rogers/Fido and Bell/Virgin Plus have also announced they are waiving long distance calls and texts sent from Canada to Turkey and Syria. Update Feb. 8: Rogers told iPhone in Canada in […]
Gary Ng
20 hours ago