People are going ballistic over the net right about the speculation of Rogers iPhone 3G data plans. Are they going to match AT&T’s pricing plans? Is the leaked $30 unlimited data plan really true? We will soon find out in exacty 21 days (iPhone 3G preview here). Here are some more interesting notes for you to digest, which will ultimately help you come to the conclusion that…

b) Canadians are tired of being held ransom by a handful of Canadian wireless carriers having way too much fun charging whatever they want–oligopolies are awesome!

I received a phonebook-sized book of “customer scenarios” today for training. Upon a look on the plans, it would SEEM the $30/$45 is true. All of the total MSF (monthly service fees) seemed to be a voiceplan + either the $30 or $45 dollar option.

What I mean here is that the scenarios did not explicity label “$40 voice plans” and “$30 iphone data plan” for “$70/month”. Instead, it was just “$70/month”. Here were the prices listed for plans:

What I gather from this is as long as you have atleast a $30 voice plan, you then pick your poison of either $30 or $45 iphone data, and you’re golden.

So what this essentially means is that you’re looking at for the iPhone 3G, cost wise at the very least is (thanks mike):


i.Fido recently provided updated information regarding the plans he leaked plus sources:

I got yet another confirmation today from yet another insider that this price plan information “leaked” to me is intentionally 100% correct. In fact, it may be purposely leaked to me to drive up hype and/or whatever other reasons unknown. The main source has never been wrong, ever. I have full confidence. But as always, Rogers execs still have time to change their minds so let’s just wait. Nothing is in stone until officially advertised. PERIOD.

I also received an email from a user who spoke with a Rogers CSR. This CSR mentioned the iPhone 3G will be selling for $700, without a contract. Umm…if that’s true…$700 for an unsubsized iPhone 3G?! I’d be better off spending a couple hundred more and buying a refurbished Macbook!

On the lighter side of things, commentor Unknown over at Gizmodo posted this response to an article related to Rogers 3 year contracts, which made me giggle like a little school girl:

THREE years? You can get a shorter sentence than that for killing someone! No way I will buy an iPhone with a contract.

To add even more confusion to the mix, Crackberry.com reports the following new Blackberry prices, according to a recent Rogers slideshow presentation: 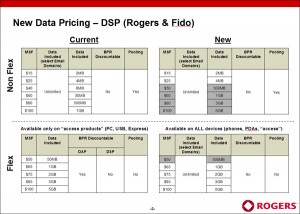 Can you imagine the fallout if the iPhone 3G $30 unlimited data plan rumor comes true? If I were a RIM executive I would be majorly upset at Rogers. iPhone vs Blackberry wars anyone?