“History repeats itself.” That’s one quote you hear over and over, and I think it’s safe to apply this to yesterday’s less than stellar iPhone 3G S launch by Rogers. Last year, Canadians lined up coast to coast to get their hands on the first ever iPhone launched in Canada. You would think Rogers would have learned from their experiences a year ago, but unfortunately this is not the case.

Last year, the systems required for activating iPhones crashed around 9AM PST. Okay fine, so it was a major launch worldwide and Rogers was unprepared for the load on their systems. Fast forward to yesterday, and around 12PM PST, the systems crashed yet again!

While people had to wait and also have their iPhone 3G S units “on hold”, the bigger picture is not the systems crashing. It was more about the misinformed, confused, and stressed Rogers employees. You may recall that Rogers only announced their upgrade pricing 12 hours before the launch.

By doing so, their employees only had minutes before their shifts to grasp the new, complex upgrade policies and be able to explain them in layman’s terms to customer over and over again. This was the situation I found myself in yesterday on my quest towards my iPhone 3G S.

I decided to visit the Rogers Plus store located nearby on Broadway/Arbutus in Vancouver. Although I had an iPhone 3G S “on hold” at a farther location, I decided to see if I could test the waters nearby first–boy, was that ever a mistake!

Upon entering the store around 3:30PM, I had to wait 15 minutes to get to the counter, which wasn’t extremely busy at the time. Once I got there, I explained that I wanted to do a HUP (Hardware Upgrade) on my wife’s account and buy the iPhone 3G S. My wife’s retention plan is worth keeping and extending for a couple more years since it works out to $30 after taxes/SAF for a plan that includes 200 daytime, 6PM E/W, CID, 100 LD, and 125 SMS.

I didn’t want to extend my 3 year contract into a 4 year contract. My iPhone 3G plan is okay, but not the best and I want the choice to switch to other GSM carriers when they are setup here. Adding another year was not an option for me.

In the end, the rep said that there was no way they were going to sell me an iPhone 3G S. Why? Because my voice plan was less than $35/month and I wasn’t willing to commit to a 3 year data plan. She had a Rogers rep on the phone tell her this and that was final. This was today’s policy for everybody.

Wow. So Rogers has decided today’s launch would be about committing everyone who wanted an iPhone 3G S to $35/3yr data. I knew this information was false, so I quickly left the store, dejected and frustrated about my time wasted there.

Fast forward, X1Zero and his team of ninjas helped get me setup with a black 16GB iPhone 3G S, even though I didn’t meet the so called “terms” stated above. So, I have my iPhone 3G S and let’s just say I’m happy now. 🙂

Germapino:
I called Rogers and the ignorant young chick told me my upgrade would be $470 for an upgrade to the 3GS 32MB.
I told her she was wrong. She said the computer never lies.
I called again. 10 min wait. Informed woman said itâ€™ll be $274 for 3GS 32MB.
Ensure you get someone who knows whatâ€™s going on. 1/2 the people there just learned about the 3GS during the first 15 mins of their shift.

Tommy:
Iâ€™m so disappointed today. I currently have a smartphone, so just to be sure I kept calling Rogers all week asking if I was eligible for the 3GS and the answer I kept getting was â€˜yesâ€™. Now come today I get to a Rogers store and I am told Iâ€™m not eligible. Then I call Rogers and they say Iâ€™m not eligible because I have a smartphone and I havenâ€™t achieved the 2 years hardware upgrade status yet. When I joined Rogers just over a year ago they said hardware upgrade eligibility was 1 year. Iâ€™m totally, totally disappointed.

Jack:
Just thought I would share my story with everyone of trying to upgrade my 3G phone this morning. Like many, I got my 3G on July 11, 2008, and I was thrilled to find out that I qualified for $500 off the no-term price (see offer #2 above) â€“ which means my 32GB Iphone 3GS would be $299. I went to the local Rogers store this morning with a print out of the offer from the Rogers website. In short â€“ the store had never heard of the offer. They even had to call customer service and fax them my print out â€“ and they still wouldnâ€™t honour the offer. After a 90 minute ordeal, I left with no iPhone. I called cust service from home and had to read them the url of the offer on their own website. After being placed on hold for a while, they told me that they would honour the website special and are now sending me the iphone 3GS 32GB for $299. Beware of ignorant Rogers employees!

Positive Experiences Happened Too Of Course

Now, not all was negative about the launch. Lots of people did encounter competent and informed employees which enabled them to upgrade without a hitch. So the launch wasn’t that big of a FAIL, but still, you would think a large corporation like Rogers would be prepared for an iPhone launch by now. Let’s hope that maybe Rogers will actually learn from this for the future.

So if you’re still trying to nab an iPhone 3G S, my advice would be to find a rep that knows all the policies. People have had a lot of success calling over the phone to upgrade. If you encounter a bad rep, just hang up and try again.

As for the iPhone 3G S, my initial experience with the phone is WOW. The speed upgrade makes it painful to use my iPhone 3G. Every single aspect of the OS is now silky smooth like butter, with absolutely no delays compared to the 3G. Editing video can’t get any easier plus the instant upload to YouTube is pretty awesome. Expect a mini review to come! 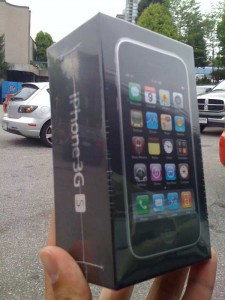 For those that jumped on the 3G S, how do you like it so far? Anyone out there still trying to hunt one down?