Rogers has started to send out text messages to customers notifying them of iOS 5 and its availability for download, on October 12th. Apple announced this date yesterday at their Let’s Talk iPhone event. 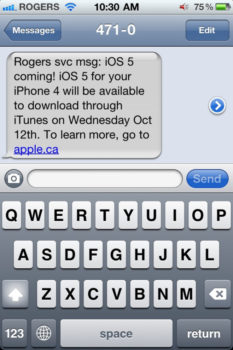 The last time Rogers sent out a text it was to promote their Rogers Reservation System, to allow customers to reserve the iPhone by paying a $40 deposit online via their My Rogers account.

Did you get this text?