If you’re looking for a cellular iPad 4, Rogers has price dropped 32GB models in both black and white in-store to $349.99. The news comes from this thread over at RedFlagDeals, where users have been able to purchase these new iPads contract-free. 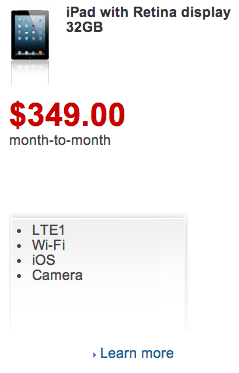 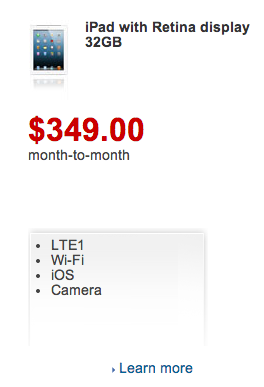 Normally-priced at $699, a corporate memo indicated a price drop to $349.99 effective April 8. As for stock, right now “your mileage may vary” as odds of picking one up depend on your area and availability.

Some have been able to buy the iPad outright, while others have been charged the $15 activation fee as part of signing up for a month-to-month plan, which will be $5. So technically this iPad could cost you $369.99.

If you’re a deal hunter, this might be your chance to get a deal on a cellular iPad 4. A brand new 16GB LTE iPad 4 costs $529 new from Apple. iPad sales are starting to become common in anticipation of new models coming out this fall.

Let us know if you’re going to jump on this. I suggest using the free app TalkTo to contact multiple stores for you.

Image via RFD Rogers and Fido appear to be offering up another 5GB of free data, but for 18 months. That’s according to Fido customers that shared screenshots of the text messages sent out by the wireless carrier on Wednesday. According to the text message, Fido says this exclusive gift is a thank you for […]
Gary Ng
16 hours ago