Rogers Proven To Be Canada’s Most Reliable Network?

Well it seems that Rogers thinks otherwise as the folks over at MobileSyrup came across a newspaper advertisement recently that indicates that Rogers is the wireless network that is proven to be reliable.

Along the bottom, the Rogers ad reads:

How do you define reliability? 9 out of 10 Canadians agree itâ€™s about proving oneself over time.* Rogers rolled out Canadaâ€™s first GSM network in 2001, and weâ€™ve continued to fine-tune and perfect it ever since. Today, independent researchers routinely test-drive our network for voice and data performance, confirming our reputation as Canadaâ€™s reliable network. So itâ€™s no wonder over 8 million customers count on us for their wireless needs.â€

*According to an independent consumer survey conducted in November 2009. CANADAâ€™S RELIABLE NETWORK.

So while the Rogers survey may be true, it is unfortunate that the consumer report is not available publicly. But the survey results are nevertheless interesting as Rogers, Bell and Telus not only battle each other but new entrants such as WIND Mobile as well. 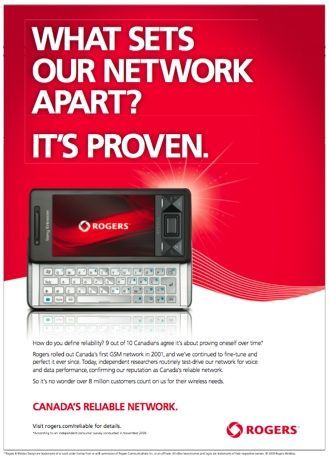