Roger’s latest quarterly report notes that they “activated and upgraded approximately 609,000 smartphones” that were “predominantly iPhone, BlackBerry and Android devices.”

It’s not all good news, as the report goes on to note that Rogers added 74,000 new subscribers to its post-paid operations, which is a significant drop from 108,000 added in the previous quarter. The third quarter is considered a busy back-to-school period when students set up new phone plans. 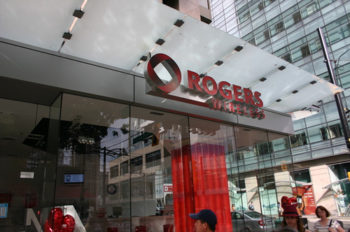 The drop in total post-paid subscribers is said to be caused  by “heightened competitive intensity.” Rogers, Telus, and Bell Canada are competing with each other and with new wireless carriers Wind Mobile, Mobilicity, Public Mobile and Quebecor’s Videotron for mobile customers.

Highlights from the report:

“Rogers delivered a balanced set of financial and subscriber results in the third quarter, with continued growth in the face of an extremely competitive environment. The strength of our asset mix, combined with a focused execution on our priorities – wireless data growth, customer retention and managing our cost structure – enabled Rogers to generate continued strong margins and free cash flow while increasing the amount of cash returned to shareholders by double digits year-over-year.”

Shares in Rogers were up seven cents to $35.59 in afternoon trading Wednesday on the Toronto Stock Exchange.

Telus has filed an application with the Canadian Radio-television and Telecommunications Commission (CRTC) for the approval of a 1.5% processing fee on all customer bill payments made via credit card. https://twitter.com/fanCRTCProfling/status/1557063188918812676 If approved, the surcharge will go into effect starting October 17, 2022. It will apply to all new and existing Telus customers. This additional...
Nehal Malik
15 hours ago

Telus's President of Mobility Solutions, Jim Senko, said in an interview last week that Rogers and Shaw's proposed sale of the latter's wireless business, Freedom Mobile, to Quebecor will reduce competition in Canada's wireless market (via the Financial Post). Quebecor "doesn’t truly understand the Western markets and would have to wholesale there any kind of...
Nehal Malik
20 hours ago