Rogers Will Not Carry BlackBerry’s Newest Z30 Smartphone [u] 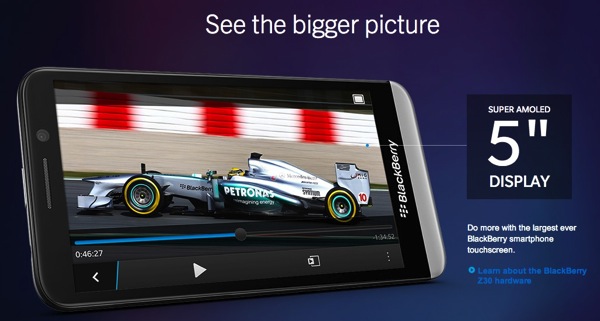 Storm clouds continue to lurk over BlackBerry. The company recently accepted a pending $4.7 billion buyout deal from Fairfax and the company’s latest earnings resulted in its biggest quarterly loss as revenue dropped $965 million, 97% of this based on a write down of unsold BB10 hardware, to go with 4,500 jobs set to be cut as part of cost saving measures.

Another blow now comes as Rogers, one of BlackBerry’s longtime carrier partners, has decided not to carry the company’s latest flagship smartphone, the Z30, which looks similar to the Z10 but has a 5-inch touchscreen.

Speaking with the Globe and Mail, Rob Bruce, Rogers’ president of communications, downplayed the “routine decision” which was made months ago, citing how the company’s retail outlets only have room for 15-17 top smartphone models–and it looks like the newest BlackBerry Z30 isn’t one of them:

“and we pick what we think are the biggest winners” from among the many manufacturers. He pointed out that Rogers had in the past chosen not to stock other BlackBerry products and said Rogers continues to stock and sell the company’s recently released Z10 all-touchscreen and Q10 touch and keyboard phones.

“This doesn’t have anything to do with whatever anyone thinks is going on with BlackBerry,” Mr. Bruce said. “People are trying to attach some significance to this decision. There isn’t any.”

Rogers isn’t alone in its decision to abandon BlackBerry models, as last week T-Mobile said it would no longer carry BlackBerrys in its stores. However, Telus and Bell will carry the Z30.

Money talks when it comes to business and with BlackBerry sales waning, Rogers know its consumers are opting alternatives such as the iPhone or Android devices. Is the Rogers decision to skip the newest BlackBerry model ‘fair for Canada’?

Update (Oct. 9/2013): Looks like Rogers has had a change of heart and will offer the BlackBerry Z30 smartphone via the following press release:

In response to customers’ feedback and excitement about the device, Rogers looks forward to offering the new Z30 to its customers.

“We have a longstanding partnership with Blackberry and continue to be big supporters of the company and their products. Rogers will be making the device available online, through our national reservation system and directly to our business to business customers. We’re pleased to add the new Z30 to our roster of Blackberry smartphones, which includes the Z10, Q10 and Q5.”