Rogers to Bring ‘Visual Voicemail Plus’ to Blackberry and Android Phones

Looks like iPhone owners aren’t going to the only ones enjoying Visual Voicemail, the service that makes listening to voicemail incredibly easy. Visual Voicemail was created by Apple to allow users to listen to messages without dialing into their voicemail service. It now appears Rogers has created their own application to offer a similar service to its customers.

In a leaked Rogers internal memo, it notes the new Visual Voicemail Plus service will be offered in February to BlackBerry and Android devices. It will also be available to any phone with MMS capability such as legacy Windows Mobile and Symbian phones. 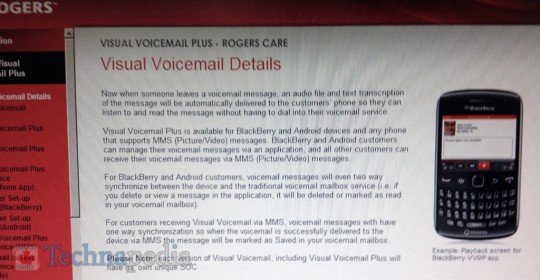 Technapedia notes the service will cost the same non-visual enhanced voicemail via an in-house developed app by Rogers. Called Visual Voicemail Plus, it will have a feature to enable users to save a voicemail, something that is currently not offered on the iPhone.

Devices to be supported at launch include the BlackBerry 9700/9800, along with the Sony Ericsson X10 and Samsung Galaxy Q for Android devices, with more phones to be supported soon after the launch. It’ll be interesting to see how this works on a non-iPhone devices.