Rogers To Increase Text Message Rate To $0.20 Per Message

As of March 16, 2011, Rogers/Fido will be increasing the per-message text message rate and all non-premium message rate to $0.20 from $0.15 per sent and received message.

Texts sent above the allotment included in a text plan or add-on will also be charged at the rate of 20Â¢. Please note that text plans and add-ons, including Value Packs will continue to include unlimited received texts at no charge.

Customers can save up to 61% and enjoy UNLIMITED received text messages1 when they subscribe to a text plan, add-on or Value Pack with a messaging bucket. If you already have a text plan/ messaging add-on, you will continue to receive texts at no charge as you do today.

This rate change will apply to the following customers:

As indicated, if you are in any kind of text messaging plan, you have nothing to worry about. But for anyone paying per-message right now, the rate is changing for the worse.

While this news should not come as a shock to anyone, it is amazing to see that Rogers/Fido sees fit to increase their per-message text message rate to $0.20. Their justification is always the same about their building “value” for customers. This change is almost as bad as when Rogers started to charge $0.15 per incoming text message, in conjunction with the existing $0.15 per outgoing message.

We’re continually investing in our networks and in new innovations such as text blocking and SMS monitoring tools that will help our customers manage costs and save money. Customers have a number of SMS plans to choose from and we’re always working to provide customers with choice and flexibility in choosing plans that are right for them. The vast majority of customers won’t be impacted since 95% of text messages are sent/received within plan buckets. The cost of plans remains the same.

I noticed in your post that you also mentioned pay-per-use customers. Customers who send more than 15 texts a month would benefit from being on a plan.

Let me know if you have any other questions. 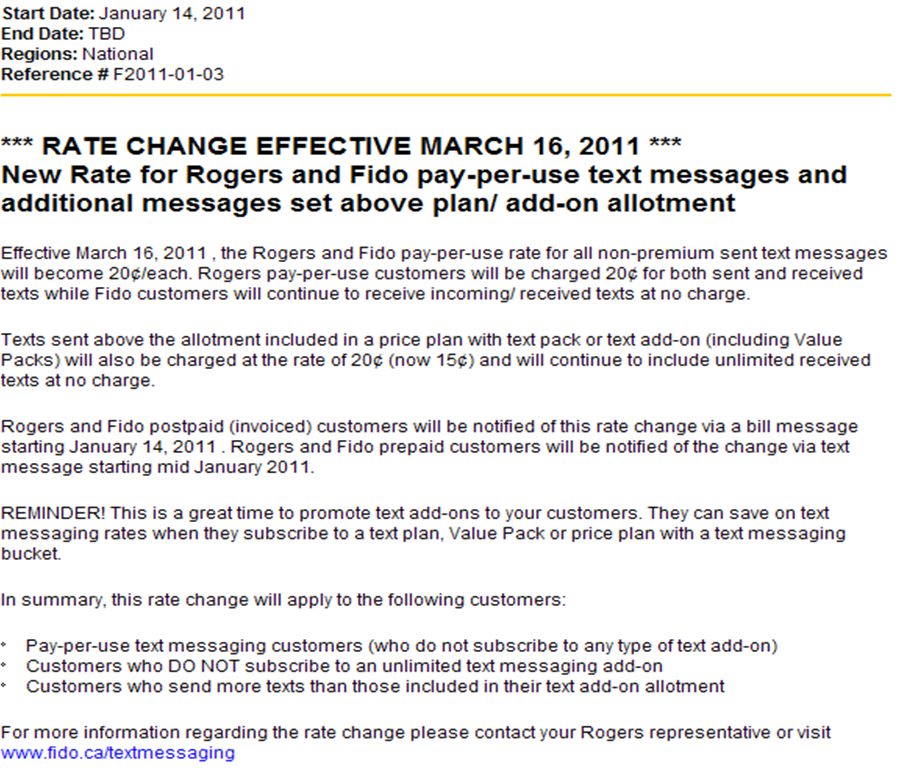