Rogers Unveils Next-Generation Interactive Stores, One Coming Near You 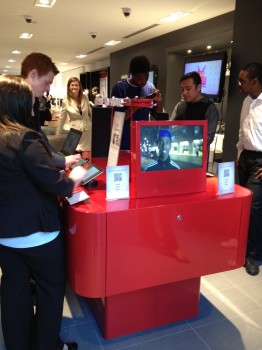 It’s not just another store you just go to service your phone or pay your Rogers bill, rather, an environment that encourages a fostering of tech-communities.

Taking over the space of what was to become yet another downtown condo, Rogers is aiming to deliver a customer experience that is intimate and more one-on-one as their digital services replace actual products.

It was only a few months ago Rogers announced they would be closing down all their video stores.  Gone are the DVDs, Blu-Rays, video games, and non-working phone floor displays.

A new service not provided before by Rogers will be technology tutorials especially useful as technology continues to evolve at a frenzied pace.

Parents won’t have to fear their children will die of boredom while parents get technical or billing support thanks to a stocked toy bin.

Rogers’ magazines are also displayed prominently, but all feature QR codes so customers can receive attractive discounts on subscriptions.

While Rogers’ signature red could be found everywhere, gone are the dull carpets and prominent black walls in the old Rogers Plus stores, replaced with a modern design, and a warm colour palate.

This is not the first store to open under the new concept – the Eaton Centre holds that distinction.  Rogers will continue to roll the new concept stores out across Ontario, with future plans to expand into the rest of the Canadian market at a later date. Stores will either be renovated locations, or brand-new locations.

The concept of a new interactive carrier store is not new, as we a while back Telus announced the launch of their own next-generation store in Laval. 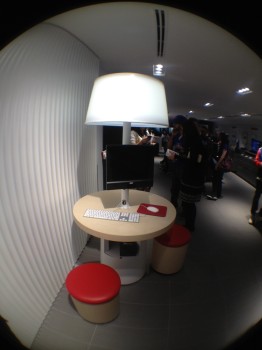 I attended the official store launch party Thursday, May 17,  for iPhoneinCanada.