Usually we get the occasional Roger/Fido spam in our email inboxes, but it’s not uncommon to get a text message too. The latest Rogers/Fido text that Canadian iPhone users have been receiving from coast to coast involves updating to OS 3.1.

Now this may seem repetitive, but you should only update to OS 3.1 if you don’t care about jailbreaking your iPhone. For those who want to update to 3.1 using an iPhone 2G/3G, you can now do so using the latest PwnageTool 3.1.

For iPhone 3GS users that want to jailbreak, we are still stuck on 3.0/3.0.1. Instructions from the iPhone Dev Team are to NOT update to 3.1 directly via iTunes (you should know this by now for all firmware updates; make sure your ECID SHSH is backed up) until PwnageTool is released for the iPhone 3GS. 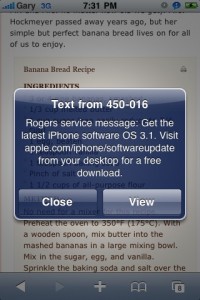 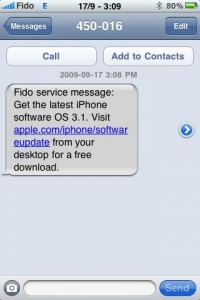 Anyone else receive their “update to OS 3.1” text message from Rogers/Fido? For those without texting plans, I hope it didn’t cost you money to receive! 😉