According to The Star, the Rogers bet on George Stroumboulopoulos to draw in younger viewers has ended, as sources say Ron MacLean will come back to host Hockey Night in Canada again, a spot he held from 1986 to 2014:

His replacement will be the man he replaced. Industry insiders say Ron MacLean is expected to return to the show’s No. 1 seat just two seasons after Stroumboulopoulos was hired with much fanfare in the wake of Rogers’ $5.2-billion acquisition of NHL broadcasting rights. 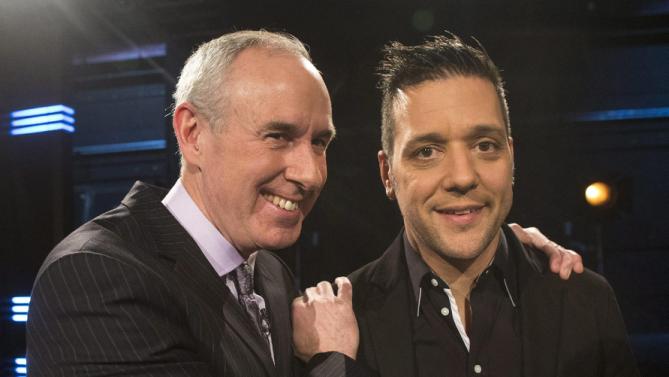 Ever since Stroumboulopoulos took over HNIC, TV ratings dropped, coupled by the fact local teams have struggled, as this year marked just the second time in history of the NHL a Canadian team did not make the playoffs.

The younger host’s wardrobe of skinny ties and suits, coupled with lower ratings, meant executives at Rogers wanted him to change his wardrobe to a more traditional look, to accommodate mainstream viewers, which insiders say Stroumboulopoulos did not think was necessary.

Scott Moore, president of Sportsnet and NHL properties, dismissed the rumours as “simply speculation”, saying to The Star “(We) have not finalized our plans for next season as the current one is not over,” adding “Once we have solidified our plans, I will be happy to comment.”

However, sources speaking anonymously to The Globe and Mail appear to corroborate MacLean will return, something even NHL commissioner Gary Bettman reportedly supports.

One source said Mr. Moore was responsible for the decision and he has been considering the move for at least a year. Discussions are under way with Mr. Stroumboulopoulos’s representatives about a contract settlement (it is believed he has two years remaining on his deal), the source also said.

MacLean’s excellent job as host of Hometown Hockey was said to have also impressed Rogers CEO Guy Laurence, who saw his work as good for community building for the company.

Shortly after MacLean was replaced by Stroumboulopoulos in 2014, poll results from Angus Reid suggested the move proved to be an unpopular one, with nearly 75% of respondents saying the removal of MacLean had hurt the HNIC brand.

Back in late 2013, Rogers signed a landmark 12-year deal for NHL rights in Canada, in a monster $5.2 billion deal. The company has leveraged its NHL GameCentre Live as one added benefit to select wireless plans on contract.

Looks like the gamble on Stroumboulopoulos has failed. I stopped watching HNIC when Ron MacLean left and Strombo took over, as intermissions were downright cringeworthy at times.

Who do you think is a better host of HNIC? MacLean or Strombo?