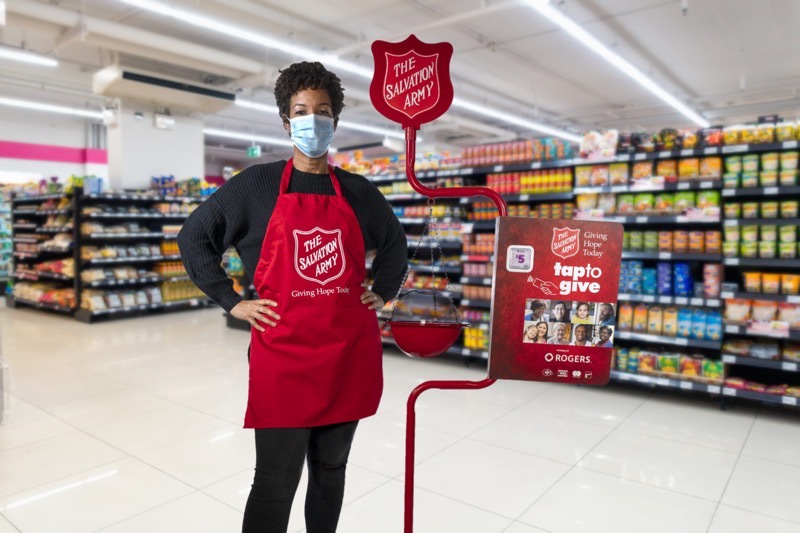 The Salvation Army Canada and Rogers have announced you can now make tap-enabled donations at Christmas kettles in over 400 communities.

This means users with a smartphone digital wallet such as Apple Pay can tap to make a donation, along with other tap-enabled credit cards. The pre-set amount will be at $5, while an option is available to donate up to 10 times on the same kettle and also increase the amount as well. The technology used is from Canadian startup tiptap, which will be connected to the Rogers LTE-M network.

The tiptap touchless payment unit is smaller than a deck of cards attached beside Christmas kettles.

“This has been a year like no other. The need is great – but the opportunities are even greater,” said Lt-Colonel John P. Murray, spokesperson for The Salvation Army Canada, in an emailed statement to iPhone in Canada. “Enabled by Rogers and tiptap, we are adding another option for Canadians who want to support The Salvation Army in their communities. As life became more challenging this year for so many people, this new technology for our 2020 Christmas Kettle Campaign will help us continue to operate our life-changing programs.”

Dean Prevost, President, Rogers for Business, said, “This innovative technology solution will help enable The Salvation Army Canada to make a meaningful difference in the lives of vulnerable Canadians, and it fulfills our higher purpose of strengthening the communities where we live and work.”

Tiptap ran a pilot last year in Toronto testing its tech on 10 Salvation Army kettles, which resulted in “three times the donation amounts on kettles with tap options as compared to cash-only kettles at other locations,” added Chris Greenfield, CEO and founder of tiptap.