RootMetrics has published a study of wireless network performance from Rogers, Telus and Bell in three major Canadian cities: Montreal, Toronto and Vancouver.

Their study conducted over 47,000 call, data and text tests to compare the networks at different times of the day, essentially replicating real-world behaviour. Their conclusion:

In the cities we visited, all three carriers shined during call and text testing, but the data speeds we found were especially impressive. For consumers who want fast downloads or uploads, consider this: The average download and upload speeds we found on each carrier’s LTE network in all three cities were faster than the speeds we’ve found in many major cities in the US and UK. 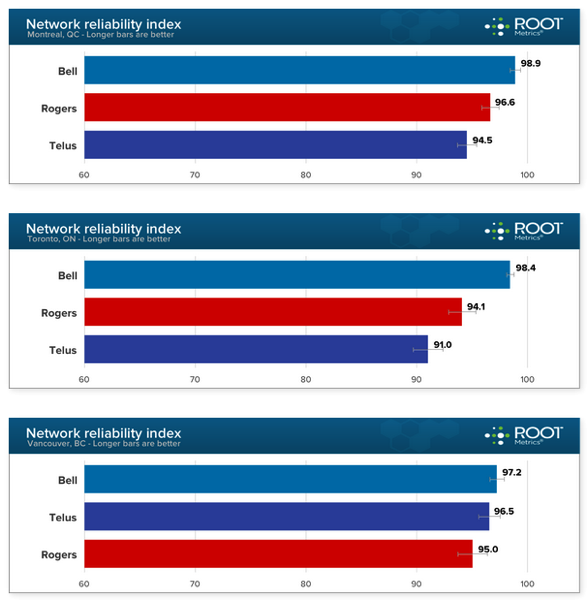 Below are the “Rootscore Award Winners” for each city:

Last month, PCMag completed an extensive nationwide speediest of our Canadian networks and crowned Rogers as having the fastest network, which is similar to what RootMetrics discovered.

Update: Here’s further clarification from RootMetrics on their testing in regards to Bell and Telus, via email:

We have done extensive analysis on this since we noticed the deltas and knew that Bell and Telus shared the same RAN network. This is important because they only share the RAN network, but they have separate transport and separate core networks. In checking this with latency and TraceRt related tests, we noticed that their performances were different: for instance, we observed quite different RTT delays and different number of hops between the client and the server – and we repeated these tests twice (once using AWS servers on West Coast and once using local speed servers in Canada).

Additionally, Bell and Telus do not share HSPA/LTE network everywhere: we have seen that Bell has additional bands (namely 2600 MHz) in Toronto area that Telus customers don’t have access to.