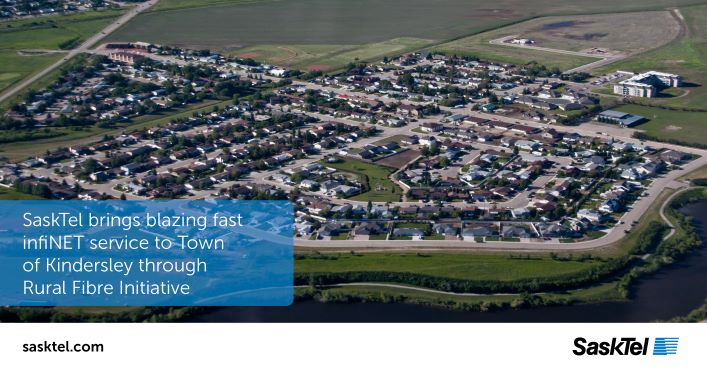 SaskTel announced on Wednesday most homes and businesses in the Town of Kindersley now have access to its infiNET high speed internet service, part of the crown corporation’s $100 million Rural Fibre Initiative.

“The investment SaskTel made to upgrade its broadband infrastructure will help strengthen Kindersley’s local economy and create a more prosperous future for the residents and businesses there,” said Don Morgan, Minister Responsible for SaskTel, in a statement.

“As Saskatchewan’s homegrown communications leader, we are firmly committed to providing the people of our province the advanced communications technologies and services they need,” added Doug Burnett, SaskTel President and CEO. “With infiNET service now available throughout most of the community, our customers in the Town of Kindersley are better equipped than ever to connect to the world around them.”

InfiNET service offers speeds close to a Gigabit per second says SaskTel The following towns have access to the service through the following phases:

SaskTel says it plans to invest over $1.5 billion in capital throughout the province over the next five years, to “ensure Saskatchewan families and businesses continue to have access to some of the best communication and entertainment services available anywhere in the world.”

The Commission for Complaints for Telecom-television Services (CCTS) on Monday published its 2021 Compliance Monitoring Report (CMR). Every year, the CCTS publishes a report to sum up the main areas of non-compliance by its participating service providers (PSPs) across Canada. According to its 2021 report, the CCTS received a total of 15,000 complaints against PSPs...
Nehal Malik
20 hours ago

Bells' President and CEO, Mirko Bibic, defended Canada's high prices for both wireless and fixed broadband internet in a recent interview with SaltWire. Bibic didn't shy away from the fact that Canada has some of the highest internet prices in the world. "Our prices are certainly not the lowest in the world and I’ll never...
Nehal Malik
6 days ago