According to documents obtained by iPhone in Canada, the promo plan for the $40/6GB and $50/8GB (and with 1GB Away Network, 2400 minutes to Canada/USA), is back again, dubbed the “Big Gig Event”. 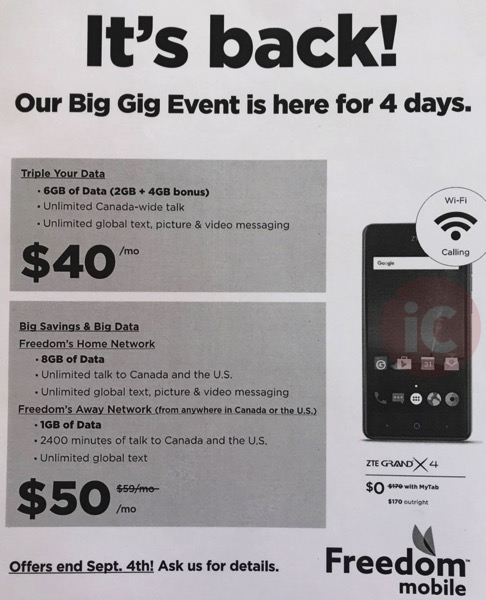 Both plans include unlimited Canada-wide calling and unlimited global text, with the $50 plan offering more value for snowbirds.

Do note Freedom’s AWS-3 Band 66 LTE network is not supported by the iPhone (yet), but that could change when new models are announced by Apple on September 12th.

Also, those interested in signing a contract for a Samsung Galaxy S8 or S8+ will get a free charging bundle (wireless pad; fast charging adapter; fast car charger), while Sony XPERIA XA1 buyers will get free Sony speakers. But I would hold off on buying anything until after September 12th.

Shaw’s Freedom Mobile recently completed their LTE rollout in all their markets in Ontario. Again, it’s best to check the coverage in your area before you jump on these plans, which definitely put pressure on the Big 3.