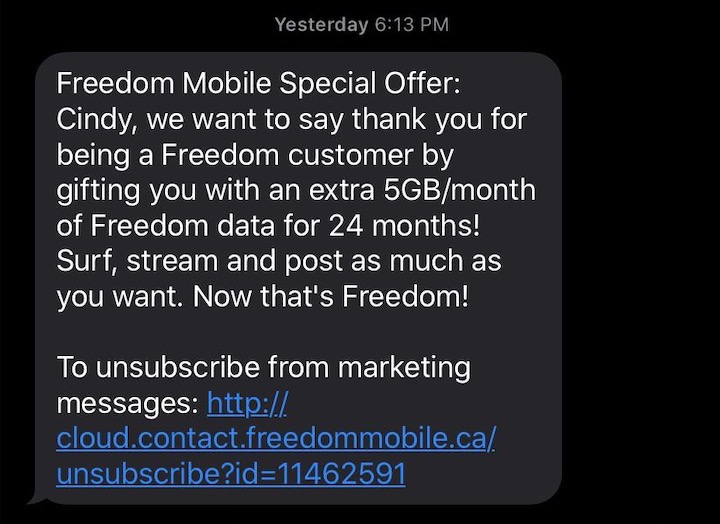 If you’re with Shaw’s Freedom Mobile, you may want to check your text messages, as the company is giving away free data to select customers.

Freedom Mobile Special Offer: ____, we want to say thank you for being a Freedom customer by gifting you with an extra 5GB/month of Freedom data for 24 months! Surf, stream and post as much as you want. Now that’s Freedom!

Customers don’t need to do anything as the data bonus is automatically applied to a user’s account, as numerous Freedom Mobile customers on Reddit confirmed.

It’s not unusual for wireless carriers to offer customers free data at random. We’ve seen Rogers-owned Fido do this last year. With the federal government promising to lower cellphone prices by 25% within two years, carriers may be trying to pad data numbers within accounts ahead of any regulations that may be coming.

Did you get this free 5GB bonus data offer from Freedom Mobile?

OpenMedia is calling on Innovation, Science, and Industry (ISED) Minister François-Philippe Champagne to take immediate steps to halt the rapid decline of Internet competition in Canada, with the non-profit saying "Internet choice and affordability in Canada approaches breaking point." Even though the federal government announced a new telecommunications policy direction for the CRTC in May, competition...
Usman Qureshi
14 hours ago