If you recently ditched Shaw’s Freedom Mobile, keep an eye out for a possible ‘winback’ offer hitting your email inbox.

The latest offer is in the form of $15/month savings on a plan of $50 or higher, as long as you remain with the company.

“Let’s get back together,” reads the headline of the Freedom Mobile ‘winback’ email. “We’re sad to see you go and we’re hoping to change your mind! Com back to Freedom Mobile and save an extra $15/month on any $50+ plan with Digital Discount for as long as you stay with us,” explains the email shared by RFD user ‘RDodds’. 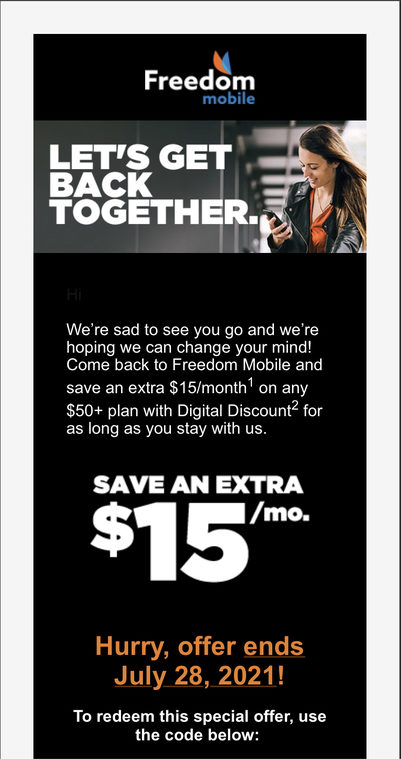 Currently, a starting $50 plan on Freedom Mobile’s website includes 15GB of data. After the $15/month discount, that can result in a $35/15GB plan, which is not bad if you’re in an area with good Freedom Mobile coverage.

Freedom Mobile says the offer ends on July 28, 2021, and those looking to come back to the company can jump on the promo by entering in a special code, detailed in the email.