When Apple unveiled iPhone 8, iPhone 8 Plus and iPhone X, the moment after the keynote, Freedom Mobile customers quickly flocked to Apple.ca to see if Band 66 LTE would be supported. It turns out Band 66 AWS-3 is supported by these new iPhones—the same band as Freedom’s LTE network.

With today’s launch of iPhone 8 and iPhone 8 Plus, Canadians on Freedom Mobile have already started putting the network to the test.

iPhone in Canada reader Xiaohan Jin, tested out his unlocked iPhone 8 this morning to see signal strength, download speeds, and also to see if there was a similar network switching problem like the One Plus 5 (his website is in Chinese but Google Translate works).

Below is a screenshot of his Speedtest.net tests, with the first three locations at his home in Mississauga (updated last 3 locations): 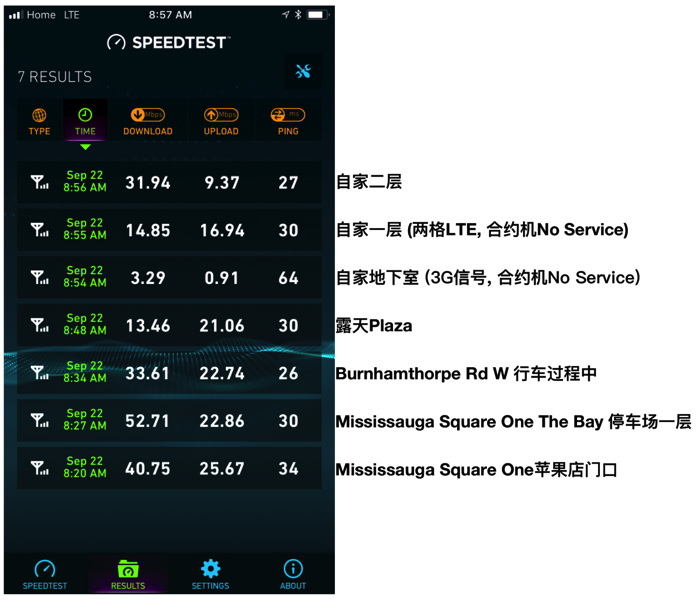 Calls take place on 3G, while data is handled on Freedom Mobile’s LTE network. After phone calls on 3G, there were delays and issues jumping back to the Freedom Mobile LTE network (same as the One Plus 5). iMessage and FaceTime works fine over cellular and are able to activate as normal.

According to Xiaohan, he’s going to keep using Freedom Mobile on his iPhone 8, since his plan includes U.S. roaming and he travels down south often, so it appears the network is good enough for his needs.

Obviously, iPhone 8, iPhone 8 Plus and iPhone X aren’t officially ready for the Freedom Mobile LTE network, so for people looking to test it out, don’t expect everything to work properly as expected. But from these quick tests, it appears Freedom Mobile LTE speeds on an iPhone 8 are decent, if you’re within good coverage.