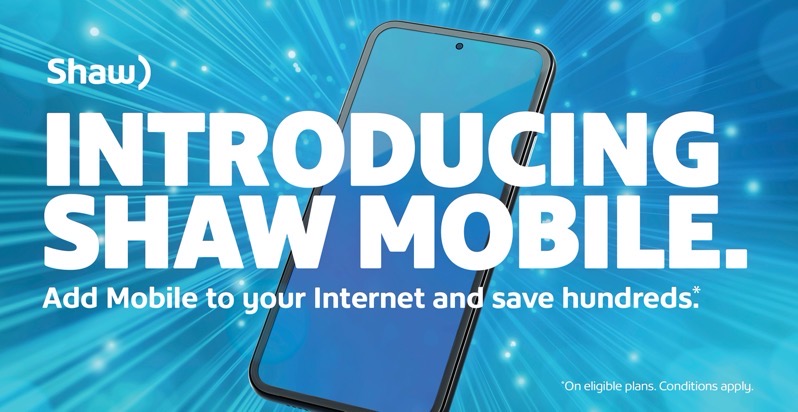 With today’s launch of Shaw Mobile, the parent company of Freedom Mobile now operates a new wireless service that is only available to its internet customers in British Columbia and Alberta.

“Shaw Mobile customers will get the most cost-effective wireless experience in Canada by taking full advantage of our Fast LTE and our WiFi service, powered by Shaw Fibre+,” said Brad Shaw, Executive Chair and CEO, Shaw Communications, in an issued statement to iPhone in Canada.

“We are pleased to deliver what Canadians have wanted from their wireless carriers for years — innovation and technology that helps them save money without sacrificing connectivity,” added Shaw.

Shaw Mobile Has Two Plans: Unlimited Data and By The Gig 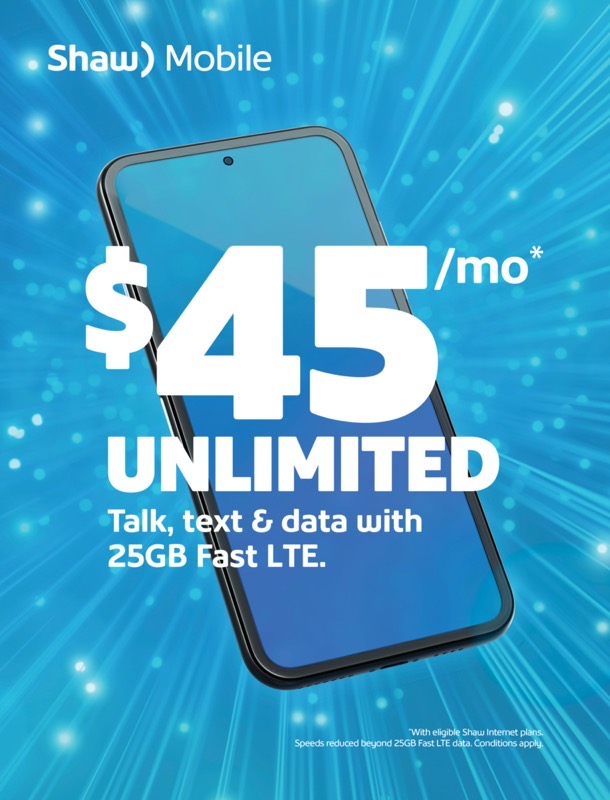 Shaw Mobile will operate on the company’s LTE network and offer two introductory plans: $45 per month plan with 25GB of ‘unlimited’ data (throttled once your allotment has been exceeded).

A $10/month U.S. and Mexico roaming option is available.

This pricing undercuts the ‘unlimited’ data plans offered by Rogers, Telus and Bell, which typically start at $75 per month for 10GB of data. The decision to opt for 25GB for Shaw Mobile’s ‘unlimited’ plan was to “be slightly ahead” of incumbents, said the company in a briefing to media.

As for the second part of Shaw Mobile—the most compelling—is for Shaw Internet customers to add up to six lines for free, which will include unlimited nationwide talk and text.

These free lines will have the option of purchasing data available at $10 for 1GB, as part of By The Gig plans. Unused data purchased for these lines will automatically rollover for up to 90 days. You can imagine this will be popular for families to get free phone lines for children and other family members.

Shaw Mobile will also have activation fees (like Freedom Mobile), priced at $20 per line. Extras such as Caller ID and voicemail will be included.

To sign up for Shaw Mobile, one needs to visit a Shaw retail location or over 120 locations of national retail partners in B.C. and Alberta, such as Walmart. You cannot sign up online for now.

Shaw Mobile will also be available as a standalone service for all at market rates, meaning you do not need to be an internet customer to use the service.

McAleese told iPhone in Canada in a media briefing Shaw Mobile will eventually support eSIM, which is a “couple months out”. This would allow customers with eSIM compatible handsets such as the latest iPhones to add a line using a virtual SIM, instead of requiring a physical SIM card.

Shaw Mobile will also carry the latest smartphones for customers, including Apple’s iPhone 11 and iPhone 11 Pro, to go with current Samsung Galaxy flagships. Customers will be able to bring their own phones or buy a new device with Shaw’s MyTab program, similar to Freedom Mobile.

The company says Shaw Mobile customers “will pay no data overages in Canada” when using Shaw and nationwide networks, while noting Wi-Fi Calling on compatible devices can be leveraged to make calls on Wi-Fi from anywhere in the world.

Customers of Shaw Mobile will be notified at three thresholds before they run out of data.

Shaw also said they were testing 5G in Calgary and this option would be available for Shaw Mobile customers in the future.

In a media briefing held over a Zoom video call on Wednesday, iPhone in Canada heard from Shaw President, Paul McAleese, on the details of Shaw Mobile. Media also saw McAleese show off a tour of Shaw’s newest retail store at CF Market Mall in Calgary, where the event was held.

According to McAleese, Shaw Mobile has been a “labour of love” for the company, years in the making, offering “exceedingly strong value” with its $0 talk and text offering for existing internet customers.

As for the strategy of Shaw Mobile, the company sees it as a reward for its existing base and to also secure Internet customers out west, where Shaw battles rival Telus for internet.

McAleese emphasized numerous times its gigabit download speeds are available to over a million more homes and businesses compared to its next closest competitor (without mentioning Telus by name). Shaw wants to realign net marketshare in western Canada to 50/50 when it comes to internet and believes Shaw Mobile will assist in its goal.

Shaw Mobile will be available for small and medium businesses soon in 2020, while there is no huge priority to support enterprise customers at the moment.

The timing of the launch during COVID-19 comes at a time when people are financially stressed. “We want customers to feel good about using their devices,” explained the Shaw President.

When asked if Shaw Mobile would take away sales from Freedom Mobile, the president cited examples of the ‘Big 3’ and how the latter each operate a trio of brands themselves. Shaw Mobile is still a challenger brand in western Canada, he noted.

McAleese said Shaw is “happy to be a catalyst for change in the wireless marketplace”, noting the company expects a reaction fairly quickly from incumbents Rogers, Telus and Bell. 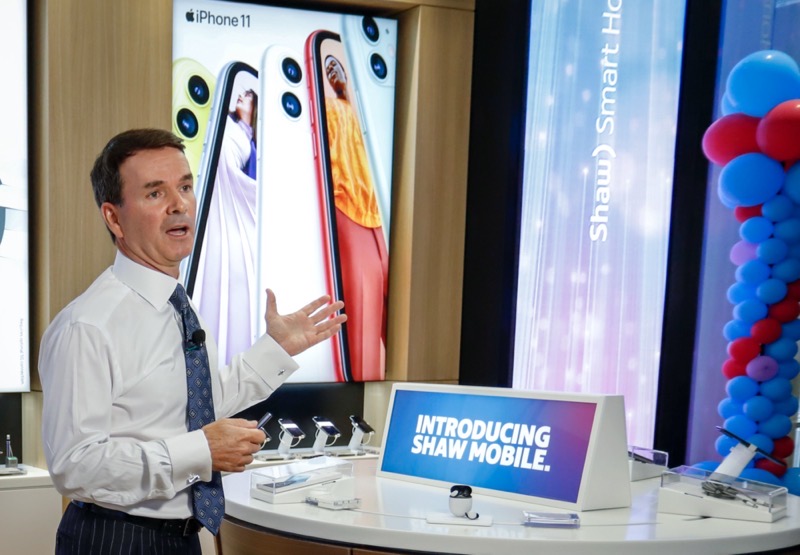 Shaw says it is redesigning 12 stores in high-traffic shopping centres by late summer, to reflect the company’s new brand and visual identity, “Brighter Together,” set to tie in new colour palettes and fibre imagery, plus updated website.

The company told media these news stores are a “dramatic departure” from previous Shaw stores in western Canada, as they are now larger, airier and show the best of Shaw’s “converged product technology”.

One new highlight at redesigned flagship stores will include a video feature wall, in which McAleese demonstrated by attempting to use a BlueCurve TV voice remote to search for “NHL playoffs”. The demo, of course, didn’t work as planned for the Shaw president at first, only working after the third try. McAleese recovered gracefully from the hiccup to continue explaining the company’s lofty ambitions for Shaw Mobile in B.C. and Alberta.