Ookla, which owns Speedtest.net, has released their latest Canadian Internet Service Provider (ISP) analysis this morning, revealing speed data from the period between November to December 2018.

According to Ookla in an email to iPhone in Canada, they noted: “We saw big changes as Shaw doubled their speeds and rose to the second fastest ISP in Canada.” 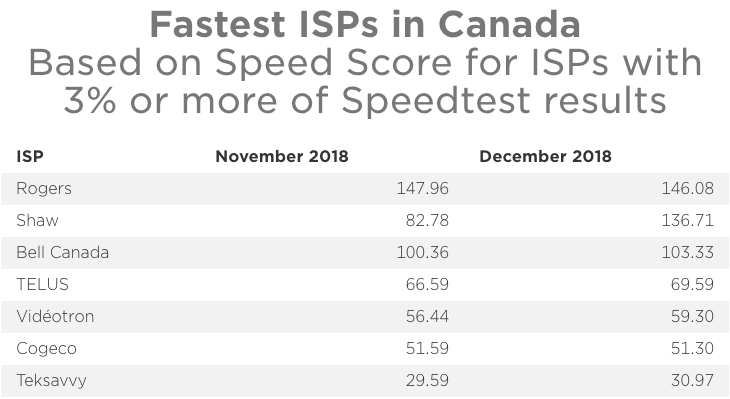 Back in December, Shaw doubled Internet speeds for customers to 300 Mbps and 600 Mbps, up from 150 Mbps and 300 Mbps plans, seen as a move to match rival Telus.

With Shaw’s speed boost, it also affected the rankings of cities where the company offered internet, in Western Canada. Vancouver, Calgary and Edmonton speed increases of 41%, 56% and 48% respectively. The Shaw speed increase in Vancouver enabled the company to dethrone Novus in the city as the fastest ISP.

When it comes to global rankings, Ookla says Canada jumped nine spots in the Speedtest Global Index from 16th to 7th, during the November to December 2018 period. Canada’s average download speed over fixed broadband saw a rise from 91 Mbps to 109 Mbps.