Shaw has announced their WideOpen Internet 150 plan, their most popular Internet plan, now no longer has a data cap. The plan offers download speeds up to 150 Mbps and upload of up to 15 Mbps; according to the company, the plan is available to “over 99 per cent of Western Canadians” within their footprint. 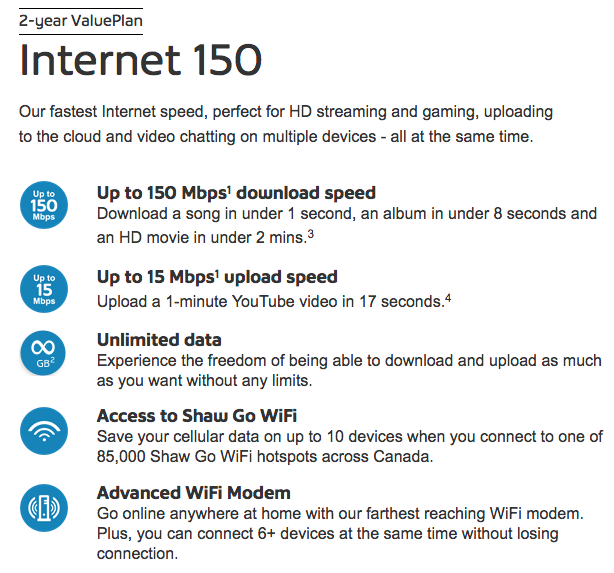 “Canadians love the Internet, and are using more data than ever before. At times though, they can be hindered by restrictive caps and costly overage fees that can curb their online use and make unfettered access impossible,” said Chris Kucharski, President, Consumer and Business, Shaw Communications, in an emailed statement to iPhone in Canada.

Kurcharski continued to say, “We want our customers to use the Internet as much as they want, and by removing these restrictive barriers, we’re making it even easier for them to take advantage of our top-tier speeds and ultra-fast network.”

Western Canada rival Telus, offers an Internet 150 plan as well, with upload and download speeds of up to 150 Mbps, but the data cap is 1 terabyte (unlimited data is a $15/month add-on). The plans starts at $47 for the first three months, and $85 per month after.

We’ve reached out to Shaw for clarification on whether existing customers need to call in to change to the updated Internet 150 plan, or if the unlimited data cap is applied automatically. We will update this post once we hear back from the company.

Update: Here’s what a Shaw representative emailed in a statement, regarding existing customers on the WideOpen Internet 150 plan:

Rogers, Shaw and Quebecor announced on Friday they have signed a deal for the sale of Freedom Mobile to the latter, making their initial $2.85 billion agreement from mid-June now official. The deal is subject to regulatory approvals and the closing of the Rogers-Shaw merger. According to all three telcos, the deal "provides the...
Gary Ng
3 days ago