Finland-based consultancy, Rewheel Research, has released another report detailing the state of the Canadian wireless market, this time examining why competition is so weak.

The 10-page teaser report, released on September 8, 2019, details, “the Canadian wireless market is ruled by provincial mobile network duopolies and monopolies. While in some provinces regional operators increasingly challenge the incumbents, at the national level, Canada is a de-factor network duopoly.”

Rewheel says the “fragmented” Canadian wireless market and its “provincial mobile network duopolies and monopolies” are “stitched together by extensive and possibly coordinated roaming and network sharing agreements.”

The study says only in Quebec did they find four wireless carriers operating “independent and substantial mobile network infrastructure.”

When it comes to Canada’s Big 3 wireless carriers, Rogers, Telus and Bell, Rewheel says their collaborative nature when it comes to reciprocal network sharing and spectrum cross-licensing, for example, “are most likely restrictive and anti-competitive.” 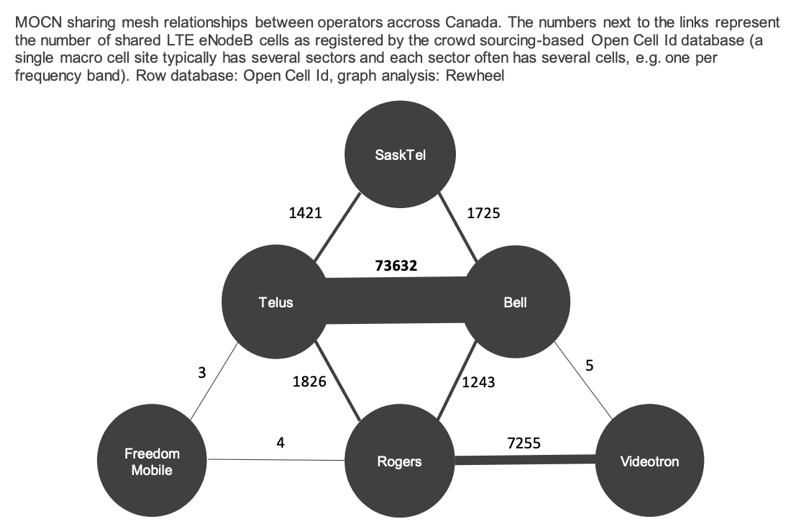 Rewheel also says the CRTC and its mandated wholesale rates for national roaming data are “excessive” and “ineffective”, as they are based on a flawed methodology and only protect the “duopolistic network structure” from new competitors.

The study says the number of macro cell sites in place by Rogers, Telus and Bell, are about the same or less than Finnish wireless operators, despite Canada having “6x more population and 30x larger land area,” countering an argument by the Big 3 citing world-leading mobile network performance.

Rewheel gives the example of Manitoba, where Telus only has cell sites in Winnipeg and along some major roads in the south. Other than that, Rogers has the most extensive coverage followed by Bell. Using Open Cell Id data, Rewheel says there is coordination between the Big 3 in areas of Manitoba.

Similarly, in Vancouver, Rewheel says “Bell has basically no own cell sites and spectrum deployed in Vancouver,” with the company’s network “emulated” on the Telus network using multi-operator core network (MOCN) for sharing. 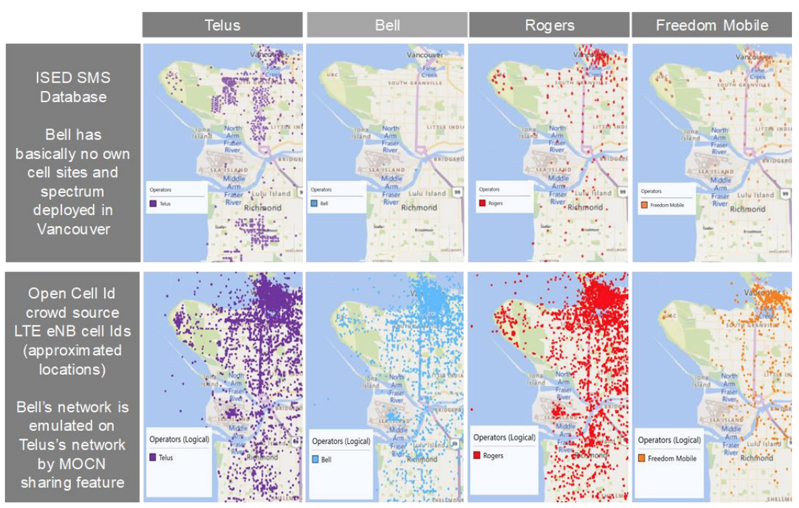 How to fix the non-competitive Canadian wireless market? Rewheel says even mandated mobile network virtual operators (MNVOs)—which the CRTC is pushing for—will not increase competition, as rather, “significant structural remedies are required.”