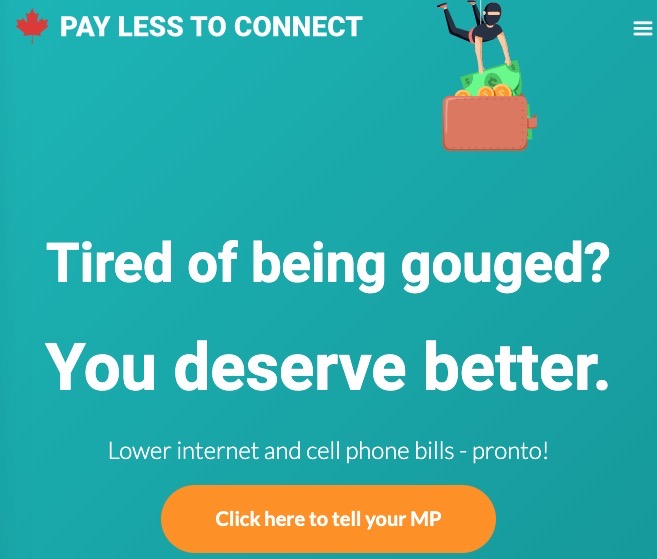 Last March, independent telecom TekSavvy launched paylesstoconnect.ca, to make it easy for Canadians to write to their Members of Parliament to demand lower wireless and internet bills. Shortly after launch, TekSavvy said over 66,000 letters had been sent to MPs across the country.

“When Big Telcos game the system, we all pay more,” said Janet Lo, VP Privacy and Consumer Legal Affairs. “Canadians have been clear that they expect lower prices and more choices to stay connected.”

Incumbents such as Rogers and Bell are fighting the CRTC decision in court and have petitioned the federal government, through the court system. These price hike petitions are available for public comment until February 14, 2020.

“The Big Telcos game the system with impunity, kneecapping competitors while Canadians pay the price.” said Andy Kaplan-Myrth, TekSavvy’s VP Regulatory and Carrier Affairs, in an issued statement. “Cabinet should not only reject their Internet price hike petitions, but hold the Big Telcos accountable for their anti-competitive activities while the CRTC opens up the mobile sector to wholesale competition too.”

Letters to MPs will state the following:

As a constituent in your riding, I am writing to express my frustration with the high price of internet and cell phone services, and to voice my support for the CRTC’s decision to improve the affordability of internet services for Canadians.

Canadians simply require internet services to stay connected at work and at home. Yet we pay too much and have very little choice. The market is controlled by a few large companies who take advantage of us and keep prices high. The Government of Canada and the CRTC have a responsibility to protect consumers by ensuring we have real choice and affordable options. It’s in the best interests of all Canadians.

The Government of Canada needs to put our interests first – ahead of the large telecom companies. I want and expect the CRTC to promote competition and affordability and for the large companies to be held accountable for their actions. Otherwise, we won’t have any real choice and my bills will continue to eat up more and more of my household budget.

As your constituent, I am respectfully asking that you act to support the CRTC’s decision to promote affordable internet prices and to protect consumer interests.

Chatham-based TekSavvy has over 300,000 customers across Canada.

Update: A TekSavvy spokesperson told iPhone in Canada prior to today, over 75,000 letters had been sent out through paylesstoconnect.ca.