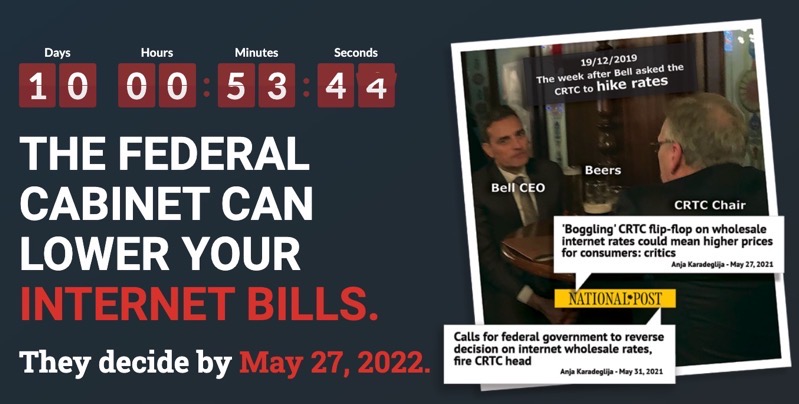 Independent internet service provider (ISP) TekSavvy announced on Tuesday it has relaunched its PayLessToConnect.ca website, which allows Canadians to quickly and easily contact their local Member of Parliament over an upcoming internet decision, that “can lower your internet bills.”

“With the stroke of a pen, the federal cabinet can lower internet bills for millions of Canadians. In May 2022, they must decide: Will they lower your cost of living, or protect big telecom’s massive profits? Contact your MP below. It takes 15 seconds,” says the TekSavvy campaign’s website, noting the feds will make its key decision on May 27, 2022.

TekSavvy says “Big Telcom’s greedy conduct has gotten them hundreds of millions of dollars of free cash during the pandemic,” as a result of the CRTC’s devastating decision on wholesale internet.

After filling out your name and postal code and clicking submit, an automated email will be sent to your local MPs. The letter reads as follows:

As a constituent in your riding, I am writing to express my outrage over the CRTC’s flip flop on internet rates, which has resulted in higher prices for millions of Canadians. The final decision now rests with Justin Trudeau and his Cabinet, who must decide by May 27th if they will overrule the CRTC’s hikes and lower our cost of living.

In 2019, the CRTC found that the big telecom and cable companies broke rules and inflated wholesale internet prices, driving up major costs for smaller competitors for years. In turn, this drove up the prices that all Canadians pay. The 2019 decision was based on careful review of more than five years’ worth of evidence and was upheld by courts at all levels.

Shockingly, in May of 2021, the CRTC scrapped that decision and endorsed higher wholesale fees. CRTC Chair Ian Scott (a former Telus lobbyist), was photographed having beers alone with Bell’s CEO just one week after the CRTC received the company’s appeal. The CRTC’s reversal makes a mockery of the government’s promise to lower our cost of living, while Ian Scott faces a review by the Conflict of Interest and Ethics Commissioner.

The final verdict on internet prices in Canada now rests with Prime Minister Trudeau and his Cabinet. Under Canadian law, the Cabinet can overrule the CRTC. Canadians pay some of the highest prices for internet in the world. This month, the government can change that with the stroke of a pen.

There is widespread support for this simple federal measure that will lower prices for millions of Canadians. Both major opposition parties, consumer groups, the house of commons industry committee, the mayors of Ontario’s largest cities, as well as hundreds of thousands of individual Canadians, have all urged the federal government to reinstate the 2019 decision and deliver lower prices.

I want to see our elected officials finally take the side of people who are struggling with rising costs, instead of lining the pockets of some of the most profitable companies in Canada.

I look forward to your response.

In an email to iPhone in Canada, a TekSavvy spokesperson said, “by the end of the month, Prime Minister Justin Trudeau and his Cabinet must decide whether to overturn a controversial CRTC ruling that allows big telecom companies to hike prices and legally pillage consumers’ steadily evaporating savings.”

TekSavvy says its PayLessToConnect website has already helped 300,000 people write letters to MPs since its launch in 2019.