Looks like some dealers have already started to list iPhone 6 pricing on two-year contracts for corporate employees. The following prices were sent in via an anonymous iPhoneinCanada.ca tipster, which details new activation and upgrade prices for the iPhone 6 and iPhone 6 Plus.

Smart Cell Communications is an authorized TELUS dealer and they list the following prices for new iPhone 6 contracts and upgrades: 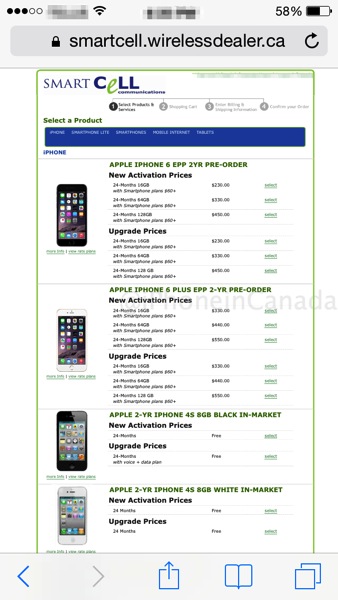 Of course, these prices are important as they provide us with a ballpark figure on what 2-year contract iPhone 6 pricing will be. Looks like our iPhone 6 contract price predictions weren’t that far off or could be fairly close to the regular numbers.

The Canadian Radio-television and Telecommunications Commission, the country’s broadcasting and telecommunications regulator, announced on Monday morning its website and phone lines are down for the count, in what appears to be an unscheduled outage. “Please note that our website, its related applications and phone lines are temporarily unavailable, we will update you as soon as […]
Gary Ng
11 hours ago