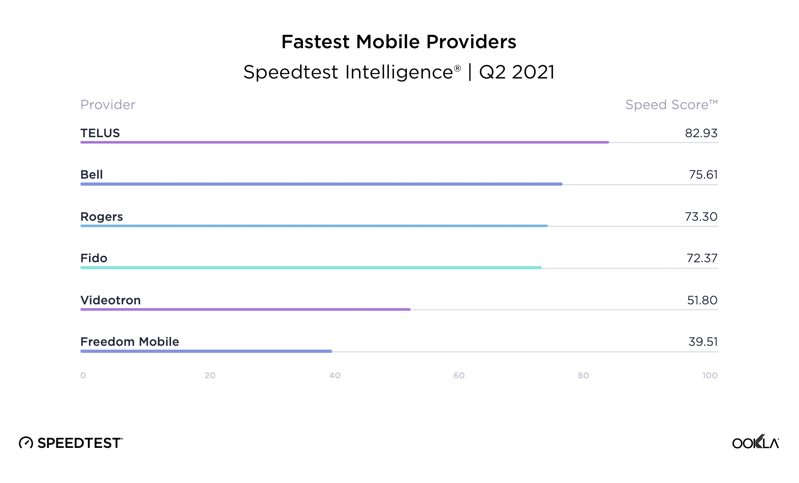 Ookla has released its Q2 Canada Market Report on Thursday, detailing the top wireless and broadband providers in the country for 2021.

When it comes to ‘fastest mobile operator’ in Canada, Telus retained its crown with a Speed Score of 82.93, while Videotron was dubbed the country’s ‘most consistent operator’. Shaw’s Freedom Mobile had the lowest latest at 19 ms out of all wireless carriers.

Bell led median 5G download speeds at 191.26 Mbps, compared to Telus at 184.45 Mbps, with “no clear statistical winner,” says Ookla. Rogers saw the highest 5G availability out of all carriers at 33.6%.

For fixed broadband, Shaw and Rogers led the pack with Speed Scores of 181.66 and 179.95, respectively, while the latter edged out the former in the consistency score marks.

As for the country’s fastest fixed broadband region, that again goes to Newfoundland and Labrador in Q2, seeing a median speed of 119.77 Mbps. The fastest median fixed broadband download speed went to Calgary at 129.60 Mbps.

You can check out Ookla’s full Q2 report for Canada over at this link.

The Canadian Radio-television and Telecommunications Commission, the country’s broadcasting and telecommunications regulator, announced on Monday morning its website and phone lines are down for the count, in what appears to be an unscheduled outage. “Please note that our website, its related applications and phone lines are temporarily unavailable, we will update you as soon as […]
Gary Ng
16 hours ago