If network speed is a factor you consider when choosing your carrier from the Big 3, well, that’s a hard one to decide, as their efforts to match each other’s speeds have brought results, and the latest OpenSignal report supports this with hard data.

After collecting more than 289 million data points from 15,272 Canadian smartphone users between October 1 and December 31, OpenSignal has found that “Bell, Rogers and Telus all have more in common than not. All three are fast and offer excellent access to LTE signals to the point that no single operator dominated any of OpenSignal’s metrics.” There is a significant increase in network speed compared to a year ago, but the conclusion is the same as last year, although Bell then took the speed crown with an average speed of 19.92 Mbps.

After crunching the data collected from users, OpenSignal has declared Telus and Bell as leaders in many of the tests, but Rogers followed them closely, so it is fair to say that all three are equally strong performers. It may not surprise you that Telus and Bell are so evenly matched in terms of speed – they share a network.

When it comes to download speeds, OpenSignal users measured 30.5 Mbps on Telus’ network, 28.4 Mbps on Bell’s, and 27.3 Mbps on Rogers’. Telus wins the overall download speed contest, which includes LTE, 3G speeds and network availability, with 24.1 Mbps, followed by Bell with 22.1 Mbps and Rogers with 21.3 Mbps. 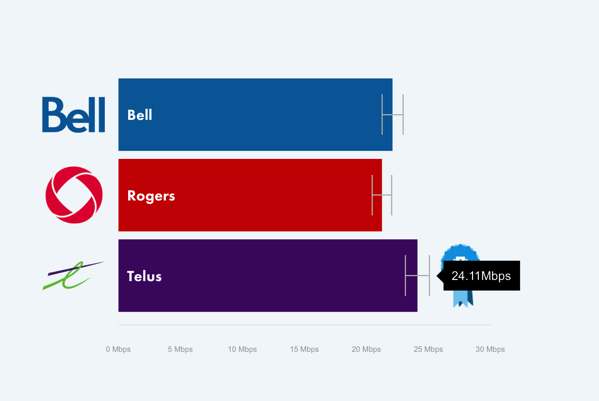 Telus also claims first place in another category, network latency, which measures the delay data experiences as it travels between points in the network. In terms of network latency, Telus has the most responsive network, with an average of 43.6 milliseconds on its 4G network, followed by Bell with 47.1 milliseconds. Rogers’ customers measured 51.2 milliseconds, on average.

The OpenSignal “State of Mobile Networks: Canada” has many more interesting tidbits about the incumbents’ networks. You can read the full report here.