Just as Apple did yesterday with the launch of the Bell iPhone in Canada, Apple has now acknowledged Telus to be an official carrier of the iPhone.

Like with Bell, Apple never publicly confirmed that Telus was getting the iPhone. During the last month, only Rogers and Fido had been listed as official carriers of the iPhone in Canada on the Apple Store web page. Bell had their name added on November 4, 2009 which went along with the Bell launch of the iPhone on the same day.

As Telus released the iPhone today, Apple has finally updated their website to indicate Telus as a point of sale for the iPhone 3G and iPhone 3GS.

I guess sometimes Apple just does not bother saying anything at all.

You can check out the screen shot below from Apple’s website or visit it here. 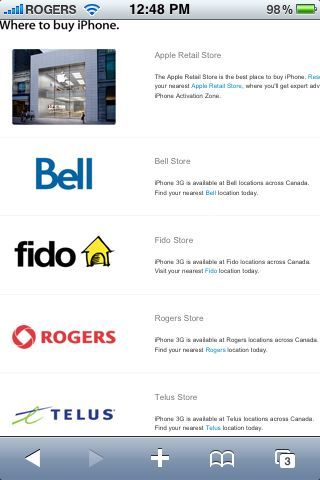