With an iPhone 5 launch ‘imminent’ in October (or September, your pick), existing supplies of the iPhone 4 appear to be ready for clearance. MobileSyrup has noted Future Shop will be selling the iPhone 4 for $99 on a three year contract from Telus tomorrow, as revealed below in the French version of the flyer: 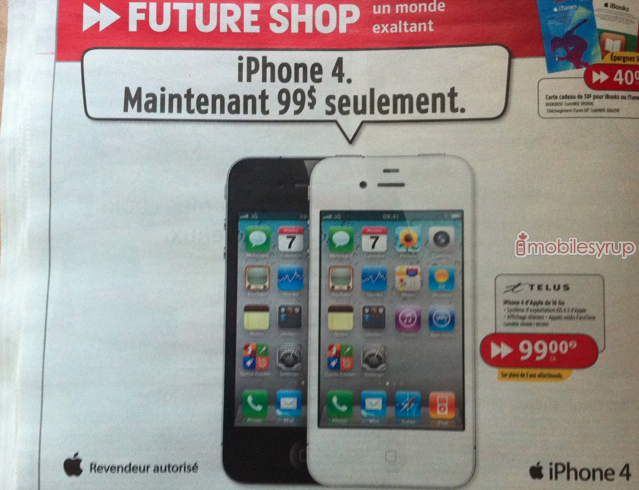 Apple’s typical pricing cycle for iPhones has usually revolved around clearing out existing models for $99 to make way for new phones. We have seen similar price drops in the past from Rogers/Fido for iPhone 3G and iPhone 3GS. Last year, Future Shop reduced prices for iPhone 3GS units from Telus on June 16th. Then, about 45 days later the iPhone 4 was launched in Canada on July 30th. If we apply this same cycle for this year, we could expect the iPhone 5 to land October 1st from Telus, as rumoured–right?

We expect this deal to also appear at Best Buy, and to be matched by Rogers/Fido, and Bell, as always. Let us know if you spot this ad in your local flyer!

SaskTel announced on Wednesday it will waive long distance and text messaging fees from Canada to Turkey and Syria, to allow customers to stay in contact with friends and family affected by the recent devastating earthquake. “Our hearts go out to everyone who has been impacted by the deadly earthquake that struck Syria and Turkey […]
Gary Ng
7 hours ago

Here are the latest Canadian cellphone plan and device deals, plus other promos from wireless carriers such as Rogers, Telus and Bell, from our partner PlanHub. As always, the promos and plans may change at the last minute, but here they are as of Wednesday, February 8, 2023. Check them out below… Bell Noticeable price changes: Samsung […]
iPhoneinCanada.ca
10 hours ago

Vancouver, B.C., resident Erica Phillips last week was finally able to rid herself of the daily calls from collections agencies hounding her to pay hundreds of dollars owed on a Bell Mobility account that had been fraudulently created in her name by someone who stole her identity — reports the CBC. "It's a huge sense of...
Nehal Malik
13 hours ago